Review of: Beauty and the Beast

Smart, dry humour abound in this satirisation of fairytale tropes. A real treat.

I’ve been convinced for quite a while now that Fat Rascal Theatre, the company which created Buzz:A New Musical and Tom and Bunny Save the World, might be the saviour of British comedy musicals. I’m convinced all over again watching their new festive offering Beauty and the Beast: A Musical Parody. 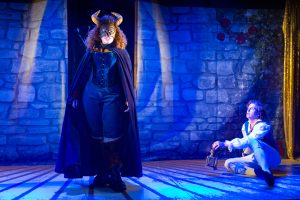 On at the King’s Head Theatre in Islington until January 6th, Beauty and the Beast is a gender reversed take on the Disney classic. It follows the bookish and delicate hero Beau who spends his days in a small french town reading and dreaming of a better life. When his mother Maureen is captured by Beast (who in this show is female) Beau offers to take her place as Beast’s prisoner. Thus, setting in motion the tale as old as time which we all know so well and exactly as we remember it from our childhood – sort of.

As in all of Fat Rascal’s work the humour is smart and dry, an intelligent satirisation of fairytales, the patriarchy and the musical genre itself. What makes Beauty and the Beast special is that it does all this without ever feeling cruel or condescending. It doesn’t have a superiority complex and, although there are plenty of moments which classify as decidedly not safe for work, it’s wholesome and friendly. Despite their flaws you love these characters, and are rooting for them as much as in any Disney film.

This is aided in part by the production’s diligent adherence to the 1991 original. The familiar music and characters mean that it really feels like a Disney-like, without ever undermining the core messages. The likes of ‘Have a Brunch’ which replaces “Be Our Guest” and “Siobhan” which parodies “Gaston” are brilliant, but the line of the year has to be “Like a long awaited turd” in the show’s contemporary take on the classic “A Tale As Old As Time”.
Beauty and the Beast is a show with a lesson to teach but that doesn’t mean it’s not still heartwarming, fun and thoroughly enjoyable. I can’t wait to see what Fat Rascal do next.