Review of: The Velveteen Rabbit

'Real' good fun for the imagination.

Teddies with one eye missing. Cuddly dogs with worn ears. Many of us have a special toy that was loved into shabbiness when we were children. Margery Williams’ classic story about a toy rabbit that becomes worn and ‘real’ through the love of a little boy has resonated with children and adults alike since its publication in 1922. Purni Morell’s charming adaptation of this much-loved tale at the Unicorn brings the story to life with invention and flair.

The show is a nostalgic homage to the power of imagination. Christian Roe plays the Rabbit—without bunny ears or facepaint. An adult, Ashley Byam, plays the Boy. From the start, then, we have to tap into the magic of imagination. In a world of virtual reality and CGI, it’s refreshing to find oneself in a world of old-fashioned make-believe. The delivery of Williams’ text is punctuated by lengthy periods where Boy and Rabbit are simply playing together onstage without dialogue, using the set and props around them to create rich imaginative worlds before our eyes. 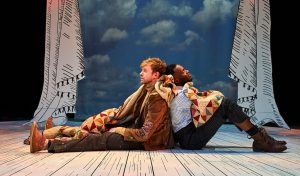 Christian Roe and Ashley Byam in The Velveteen Rabbit

Roe and Byam work together beautifully, their movements choreographed by Wilkie Branson, and it’s wonderful watching their relationship blossom on stage. Their interactions with James Button’s gorgeous set are hugely entertaining—particularly in the use of trap-doors. In one memorable scene, the pair play hide and seek, with Rabbit disappearing through one trap-door and reappearing through another. This is a show with play at its heart, and it’s an irresistible pleasure.

Everything is woven together by an exquisite piano score, written and played live onstage by Jason Carr. There’s something of the silent movie about it, in its rising and falling in relation to the level of urgency—perfect for a play that has so much action without words, and its reminiscence of a time gone by adds to the nostalgic feel.

As an adult I found this show delightful, but the true success of a children’s play is surely to be measured in the reactions of young audience-goers. I am happy to report that the children in the auditorium were entranced throughout, laughed loudly at the funny bits and joyfully ran onto the stage during the interval to play with the fake snow that had amassed on the floor. It’s safe to say, then, that The Velveteen Rabbit is a hit.