Review of: The Secondary Victim

What happens when those charged with helping people to confront their actions, and to work on avoiding situations of temptation, face accusations of impropriety? Matthew Campling's play goes beyond academic case study to show the vulnerabilities of those who are trying to help. MIchael Hanratty and Susannah Doyle excel as the victim and secondary victim.

Mud sticks. It seems that there is no profession that has escaped the wave of accusations of inappropriate sexual behaviour, and even innocent people fear a stain that remains on their reputation. It seems ironic that those charged with helping people to confront their actions, and to work on avoiding situations of temptation, can just as readily face the same accusations.

In Matthew Campling’s highly topical new play psycho-therapist Ali (Susannah Doyle) is trying to help a gym instructor, Teddy (Christopher Laishley) who may, or may not, be behaving badly with “special” clients (girls under fourteen) when a document arrives telling her that she has been accused of behaving in an inappropriate and sexual manner with a former client, a troubled young man called Hugo (Michael Hanratty). While we may have little doubt that Ali is blameless – Hugo has started a blog “yoursoulinourhands.com” and is negotiating a book deal – Ali herself has doubts. Her marriage, to a bankrupt financial advisor with a heart problem is under pressure and she is plagued by her initial impressions of Hugo. While Ali seeks help from her supervisor Marilyn (Natasha Bain), and Hugo sees a second therapist Jonny (Matt Holt), Ali still has to try to help Teddy. 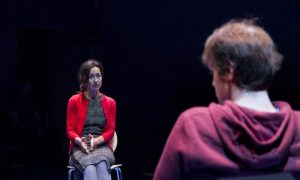 Matthew Campling has written a number of psychotherapy textbooks and at times this shows, as the narrative occasionally dwells on the process and leaves us thinking that we are looking at a number of case studies. However, his years of practical experience ensure that the stories are both compelling and realistic. It is a brave move to bring a play on psychotherapy to North London, it being a stamping ground for many practitioners, but Campling’s confidence is well placed. This confidence will no doubt have been enhanced on realising the quality of his cast. Doyle conveys all the emotional exhaustion of Ali and delivers a perfectly measured rebuttal of all Hugo’s accusations. Hanratty’s Hugo is quite mesmerising, in showing the full emotional experience of a man that truly needs therapy. While Laishley gives a convincing portrayal of a man descending into despair, he is not entirely credible as a gym coach. Similarly, Gary Webster shows an apparently caring husband, who is really more concerned about his own predicament in a way that many would recognize, but his character is so at odds with his intelligent and compassionate wife that we are left wondering how they would have ever been attracted to each other.

These are, however, minor criticisms. While Campling tells a story of three psychotherapists using a client centred approach, he does not shy away from showing the potential shortcomings of the process. Ultimately he makes us realise that those that give emotional support are not immune from needing it themselves. He does this with a timely, on-the-money play that sees its various well woven plot lines all reaching climaxes, some of which will surprise.