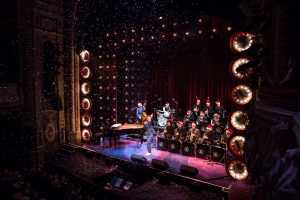 Joe Stilgoe has twice topped the UK jazz chart, been featured on countless radio programmes for Radio 2, 3 & 4, presented on BBC4, Radio 2 and JazzFM, has written award-winning songs, starred in The Old Vic’s 2015 production of High Society, and he has an established international concert career, collaborating with John Wilson, Curtis Stigers, Claire Martin, the RLPO and BBC Concert Orchestra among many others. He has had sell out runs at the Edinburgh Fringe and is a regular favourite at the world-famous home of jazz, Ronnie Scott’s.

Rob Brydon is an actor, comedian, writer and presenter. His credits include Gavin and Stacey, Little Britain, Would I Lie To You (BBC). He was appointed a Member of the Order of the British Empire (MBE) in 2013.

Scarlett Strallen is an actor and singer. Her credits include She Loves Me (Menier Chocolate Factory), A Chorus Line (Palace Theatre) and Singin’ in the Rain (Chichester Festival Theatre). She won the 2014 WhatsOnStage Award for Best Actress in a Musical.

Following the Christmas Party concert, Katherine Kingsley (Olivier nominated for Singin’ in the Rain, Dirty Rotten Scoundrels), Anna-Jane Casey (Billy Elliott, Annie Get Your Gun, Chicago, Spamalot), Peter Horsfall (Kansas Smitty’s) will be joining Joe on Monday 18 December for Joe’s unique spin on Irving Berlin’s classic, White Christmas. Joe has written and performed the title track to Michael Parkinson’s new compilation of his favourite music and performers, Our Kind of Music, which is due out at the end of November. Joe will be joining Michael on
a tour to promote the album in 2018.