Review of: Odysseus Plastok at The Cockpit Theatre

Odysseus Plastok is a joyous explosion of plastic bags, bright colours, and funny faces. The production has arguably very little to do with Homer and the Greek myth, but it’s got enough tricks up its sleeve to prove an enjoyable show nonetheless.

Audience alert: any members of the audience above the age of 6 might find the show a bit childish. That is, of course, unless they are open-minded enough to be able to laugh at simple, unpretentious humour (the lady sitting next to me certainly was). The main reason you should go and see this show, however, is its fresh and quirky flavour, rather than its intellectual gravity.

As part of the Voilà! European Theatre Festival, the production is offered in two languages, once in English and once in French. I attended the English soirée, but I suspect the French performance would have been just as (if not more) exhilarating.

Blending environmental awareness, clownish puppetry, and live music, the story is told of Odysseus Plastok, a plastic bag that ends up in the sea and experiences a series of vicissitudes, encountering all sorts of amusing characters. While the plot itself is extremely simple (and a bit hazy at times), what really makes the show (and occupies centre stage for most of the 1-hour performance) are the puppets. 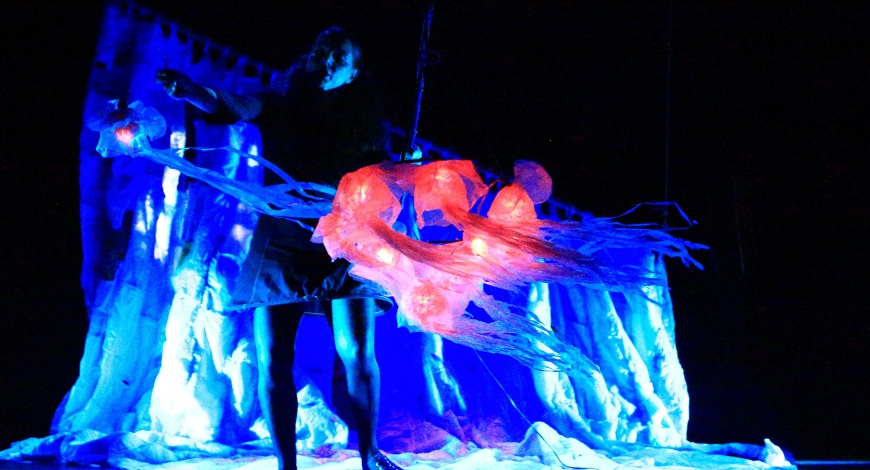 All made out of upcycled materials, and shining with vibrant colours, the puppets enlivening the performance are just wonderfully ingenious. They turn the show into a concrete ode to the versatility of plastic and its multiple (re)usages, which goes hand in hand with the end message of the pièce, raising awareness about the dangers of pollution.

Amazing is in particular the way the puppets are handled, sometimes proving even more spectacular than the acting itself – which, one should not forget, is offered in the actors’ second language. But mimics, puppetry and gestures act as a sort of universal language. They make the point that European/multilingual theatre is valuable precisely because it opens up new dimensions for theatrical communication. And indeed, if we remember the target audience, all the funny clumsiness and bizarre sounds are welcome, and we can allow the show to steal us a smile.

Odysseus Plastok runs at The Cockpit until 11 November, at 8pm. The show is part of the Voilà! Europe theatre festival. More information on the festival can be found here.