Swamp Studios is thrilled to announce that its brand new, site specific production, Night at the Bombay Roxy, will extend its run at the as-yet-unopened Dishoom restaurant in the iconic Barkers Building in Kensington, London, due to overwhelming popular demand. This rich, immersive Indian noir will now play from 27 November until 14 December.

A swinging five-piece jazz band will complete the ensemble transporting audiences to the opening night of the Bombay Roxy. Laurence Garrat will feature on double bass alongside Miguel Gorodi on trumpet, Leon Greening on piano, Dave Ingamells on drums and Helena Kay on saxophone and clarinet. The performance will be matched with a lavish dining experience. Audience members will be greeted with welcome cocktails, and then will feast on a menu of classic Bombay dishes as the performance unfolds. 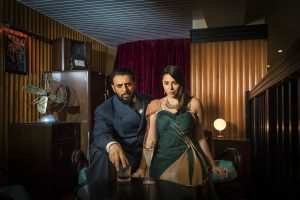 Enter the decadent world of the Bombay Roxy, where the jazz is ‘hot’ and the atmosphere is heady…

It is a close and heavy monsoon night on Marine Lines. Despite the weather, there is a jostling of people outside the Bombay Roxy. The club didn’t always have this pull or indeed its current reputation. The man behind the reinvention is the charismatic Cyrus Irani, whose name was once synonymous with Bombay’s racketeers, with murky allegiances, and with police escorts to Arthur Road Jail. But now Cyrus fully intends to put the Bombay underworld behind him. And his new venture, the Bombay Roxy, might just be his redemption.

Night at the Bombay Roxy has been created by Swamp Studios, an innovative theatre company, led by Ollie Jones and Clem Garritty (from the award-winning theatre collective Kill the Beast). Directed by Eduard Lewis, Associate Director of Dr. Seuss’s The Lorax (The Old Vic, 2015), the rest of the creative team includes composer Dom James,
movement director Sara Green, lighting designer Christopher Nairne and sound designer, David Gregory. Bhai and Khan Levy will be joined by Raj Aich as Romesh, Seema Bowri as Farah, Manish Gandhi as Rudy and Harmage Singh Kalirai will play the role of the Inspector.