A hilarious new panto that finds a fresh theme without sacrificing all that we expect from a good show. Tunes new and old are sung with great style and accomplishment. An evening full of laughs - and even a few tears.

There are two reasons (at least) why pantos so often feel overegged and dry. Our cynical, ageing population seems rather unwilling to attend without a lil’un in tow, and sometimes the overly long and rather hackneyed productions full of fading soap stars become so repetitive as to be stilted. However, with their eleventh panto, Charles Court Opera’s King Tut manages to stylishly banish both of these issues to the depths of the mummy-ridden underworld. 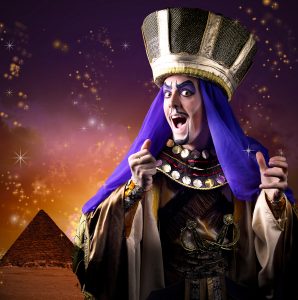 The generational problem is tackled with a production that works on different levels for all ages, with a toned down matinee performance for younger children. Writer, director and performer, John Savournin, has managed to dredge up a long-overdue new panto theme, taking the story of the discovery of the tomb of King Tutankhamen and embellishing with talking animals, glistening rubies and (of course) handfuls of sparkles and glitter. This is a wonderful opportunity for originality, but without losing the elements that people love and expect. The plot allows the presence of an archetypal panto baddy, Lord Conniving (played with all the traditional malevolence by Savournin) as well as lovelorn heroes, Howard Carter (Matt Ward) and the object of his affections, Evelyn (Francesca Fenech), and the traditional key comic character subject to the usual pratfalls (here a camel called Clive. Of course.). Howard and Evelyn disguised as Brian (ladies are not welcome) have been duped into helping to locate the riches of King Tut’s tomb by the evil Conniving – however, before Conniving can abscond the trio are whisked back to the time of the pharaohs.

Having a panto produced by an opera company also has the benefit of featuring singing quality way beyond the norm, and music director David Eaton’s adaptations of a huge range of popular songs to fit his narrative is both entertaining and intellectually impressive. Tunes as far ranging as Beethoven’s Fifth and the East Enders theme nestle snugly with the adapted works of Petula Clark (Downtown hilariously becomes Downstairs, in reference to Carter’s vulnerability to flatulence in moments of romance), the Spice Girls, the Bangles and David Bowie, to name but a few. There are also some new tunes that do not suffer by comparison

To have King Tut played as a young Welsh dude from “The Valleys” is inspired and the role is perfectly handled by soprano Alys Roberts. Philip Lee is a star comic turn as the camel and a very on-the-nose Bruce Forsyth for “Play Your Glyphs Right”. King Tut is reassuringly heavily laden with some awful puns, and is ripe with innuendo in true “Carry On” style. At times this is borderline bawdy, but it is hard to see anyone taking real offence. The audience is, as with all good pantos, encouraged to get involved, get on stage and sing-along. This is a glittering evening full of laughs, but also a few tears – quite an achievement for the genre. If you have not been to a panto for a long time, go along to King Tut – you will not be disappointed.