Review of: This Beautiful Future at the Yard Theatre

This Beautiful Future returns to the Yard after a critically-acclaimed May run, and only a few weeks after the venue received the prestigious Peter Brook Empty Space Award. Charting the short-lived relationship between a local girl and a young Nazi solider in occupied France, this delicate love story flutters around a bizarre genre-defying set with the grace and timidity of a newly-hatched bird. While the central pairing of Abigail Lawrie and Tom Morley stun in the most poignant way, the more form-defying elements of the show sometimes struggle to engage the audience, and produce a piece of theatre that (while beautiful) occasionally confuses as much as it entices. 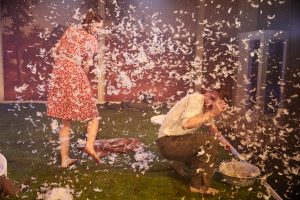 Rita Kalnejais’s play pairs karaoke with captioning, feathers with firing squads and bombs with audio booths. Cécile Trémolières’ set creates an idyllic France, all green grass, thatched houses and a huge white bed placed rock-pool-like right in the centre of the stage. While this setup works beautifully for the first part of the action, one wonders how much the design aids after Elodie and Otto are forced to separate – the latter being killed during the American takeover, the former suffering ritual humiliation in the town square after being revealed as having slept with a Nazi. With the huge bed serving as a painful reminder of the one night they had spent together, this later action is relocated to a type of aimless wandering around the edges of the stage – repeated physical movement attempting to give the actors a sense of purpose, but reading as an uncertainty rather than a comment upon the action. The occasional surtitles also bemused somewhat – while wonderful when they did infrequently appear, one questioned how exactly they related to the action onstage.

However, despite some of the unnecessary fluff around the edges, the heart of Kalnejais’s piece is achingly present in the wonderful chemistry between Lawrie and Morley. Lawrie in particular is utterly sublime, a coquettish innocence and charm deftly woven into everything she does and says, perfectly treading the fine line between child- and adulthood. One can understand how Morley’s Otto is blindsided by her frankness – a Nazi firing squad member given a voice and a personality at odds with the stereotypical ‘baddies’ on films.  Their pairing is exquisite, and the lynchpin of the piece. Spurring the audience into a rather out-of-tune rendition of Adele’s Someone Like You might sound hugely corny, but is successful only because both actors have so wonderfully seduced those watching into the candyfloss world of teenage love. Delicate and yet slightly bonkers.