Review of: You Have Been Watching

Having become increasingly interested in the theme of disability in theatre, I’d been wanting to see a show by Dark Horse for some time. The company is well established as one of the UK’s key players in working with actors who have learning disabilities and they even have their own professional training programme. Their new show You Have Been Watching is a quick-paced comedy performed by an ensemble of eight actors, all of whom have Down syndrome. 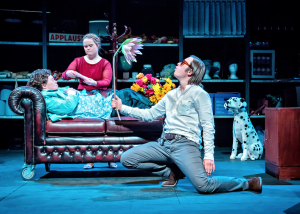 Reviewing the show, I wasn’t blind to the potential questions I would face as a person who doesn’t live with Down syndrome critiquing the work of those who do. I couldn’t help fearing politically incorrect pitfalls and of course I questioned whether and how to talk about a condition I know very little about. I worried too about potentially patronising the work, simply ‘patting heads’ with a “didn’t they do well?”, the thought of which made me squirm.

Watching the show however, any concerns I may have had seemed somewhat ridiculous; this was the work of professional actors and that’s all there is to it. I soon realised that the differences in body and voice to which one quickly adjusted felt cultural – simply another formal language – different yes, but nothing to do with ability.

Lucy Campbell’s You Have Been Watching opened as Martin Midgley (played by Joe Sproulle) addressed the audience and set the scene: this was a live sitcom in which he had landed a part as an extra. He told us it was our job to keep clapping whenever he entered, so the producers of the show would keep hiring him. No doubt a potentially clunky way to start a show (my motto has always been to earn your applause rather than ask for it) but credit where credit’s due, Sproulle had the energy and charisma to carry it off.

The sitcom was set in the living room of Mary and Martha’s house (played by Alice Rogers and Rebekah Hill respectively). The family and lovers of the two girls made up the rest of the characters. The stage furniture was kept simple – a sofa, a table, coat stand, cabinet. Behind this stood a complex wall of shelves containing a satisfyingly tessellated 3D collage of TV paraphernalia, including an “APPLAUSE” sign (which lit up).  Set and costume designer Laura Ann Price had clearly also had fun with colours and wigs. Virgil, played by Toby Meredith, in his pink shiny suit was my personal favourite.

The first three scenes were especially short and each culminated in our poor hero being thrown unceremoniously out of the window. The sitcom wasn’t going well and needed an immediate shakeup – which is exactly what it got. Out with the kitchen sink and in with a whodunnit as our host Martin Midgley was now to be cast as Detective Bob Newman in a murder mystery. All he had to do was find the body, which (without wanting to risk a spoiler) wasn’t as easy as he’d anticipated…

Structurally, You Have Been Watching was shaped by a series of short scenes (episodes of the sitcom), with Martin addressing us between each episode, niftily tying loose ends with jokes and one-liners. The format worked well and kept the scenes both essential and sharp. Short interactions intersected by some seriously well-crafted movement sequences often allowed for some classic comic turns and farcical “toings and froings”. Here we saw a potentially awkward crowded playing space deftly navigated by inventive choreographer Vanessa Grasse and an evidently physically confident company. One particular scene in which Mary and Martha (out on Mary’s hen do) gatecrashed Malcolm’s stag do with a loud and audacious dance number, left the audience gleaming.

One element of the show which didn’t get such a glowing response from yours truly was the classic trope of male hero; “find the body, solve the murder, get the girl” was essentially the main theme of the piece. I wanted the company to push these boundaries as far as they had others. Upon reflection however, this could be asking simply too much too soon: how many preconceptions can one audience have smashed in one evening? And it must be said, it wasn’t quite as simple as all that. The glorious level of absurdity to which this classic farcical plot-line was pushed included moments of genuine disbelief; requesting a date from someone who’s mourning over her grandmother’s dead body will certainly stick in the memory. This is a show that plays on a common ground, but the plot twists and sheer entertainment value of a company that’s made it their own shines through. 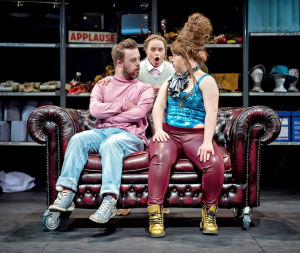 The programme for You have Been Watching says it aims to ‘change how the world perceives and responds to learning disability’ and it certainly does that. I found it utterly refreshing to watch a group of people whom I might otherwise have only seen being cared for performing a truly demanding show. I confess I was impressed by the truly embodied sense of character, complex movement sequences and in some cases vast quantities of lines. Certainly, my ignorance of what a person with Down syndrome is capable has been blasted out of the window.

However, to limit the show to only a perception buster would be hugely undermining and, I would argue, miss the point entirely. Of course the company challenges our preconceptions, but it also creates a highly entertaining piece of theatre in its own right. Furthermore, it wasn’t issue based – there was no didacticism (thank God). This wasn’t a show about learning disabilities by people with learning disabilities, this was an absurd and joyous comedy performed by talented actors who happened to have learning disabilities. The final rendition of Amazing Grace by Ben Langford (in drag as Gilda) was the cherry on the cake – I couldn’t hear the words, but the voice and the soul was all there.

You Have Been Watching will be continuing its tour at Cast in Doncaster from 11th-12th October and at the Stephen Joseph Theatre in Scarborough from 18th-19th October. You can book tickets online from Cast and SJT

All performances are captioned.