An otherwise strong production that never quite grows into its own

The allegory of England-as-garden is not one that’s new. It began long before Shakespeare, weaved its way through Milton, and now crops up again and again – as it has in Mike Bartlett’s Albion. The Albion of the title is the garden of a fictional WW1 veteran, and over the course of the play we watch Audrey Walters, a 21st century Londoner played by the stunning Victoria Hamilton, attempt to restore it to its former glory. As the garden’s name suggests, this garden and Audrey’s desire to control it represent her own particular brand of patriotism, something all the characters grapple with over the course of the play.

Unsurprisingly, Audrey’s move away from her busy life brings with it a tangled knot of other characters, tied to Albion either through her or through the land itself. We spend much of the evening alternating between laughing with and laughing at each figure in turn, depending on who is more powerful at that particular moment – whether it’s Audrey’s stroppy and unsure daughter (the excellent Charlotte Hope), her supportive and easy-going husband (given surprising depth by Paul Walters), or the scene-stealing housekeeper Cheryl (Margot Leicester). The play darts between something like a comedy of middleclass manners and a haunting investigation of mourning, picking up its cues from Dickens, Waugh, Hodgson Burnett, and perhaps even Fitzgerald. There isn’t a weak performance, but the stage undoubtedly belongs to Hamilton who, whether portraying Audrey at her strongest or her most broken down, is transfixing.

The play enters particularly interesting territory when it comes to the relationship between Audrey and Anna (Vinette Robinson), the ex-partner of her son James who died two years ago. The two women battling it out for who owns James and his memory (a micro vision, perhaps, of the conflict between Audrey and all else who love Albion) is most heart-breaking because each side is so sympathetic. We feel equally for Anna, breaking down in 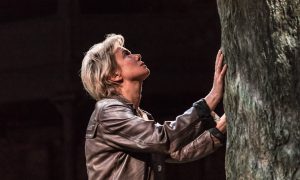 the rain at the close of act one, as we do for Audrey, who weeps over her birthday cake in a ct two. Indeed it is conflict in general where this play thrives; the positive relationships work less well.

It’s an undeniably beautiful production. Miriam Buether’s set brings the outside in; a gorgeous garden watched over by a huge tree. We see a whole year pass by and the seasons and even days are created stunningly. The segue into spring, created by the company bringing on and planting flowers around the stage, is breathtaking work from Rupert Goold.

The difficulty in Albion comes not so much from the play itself, but from what it is not. Even while this is mocked in the play, almost all of the characters are white, and those we see the most are usually also upper middle class Londoners. However much Bartlett critiques Audrey’s view of England, it remains the only one he represents, and it is difficult to see it as reflecting the state of the whole nation rather than that of a select few.