Review of: Of Kith and Kin

Price:
From £10
Reviewed by: Joshua Stephens

A competent exploration of expectant parenthood, but overly reliant on tired stereotypes and delivered too dispassionately to fully give the theme justice

At the theatre, occasionally one finds oneself watching a completely different show to the person sitting next to you. Whether this is leaning forward on the edge of your seat whilst they check their phone with disinterest, or gathering your things quickly to leave as they deliver a standing ovation. Unfortunately Of Kith and Kin was in the latter group – a production confronting a fascinating topic with too little character authenticity, relying on lazy human stereotyping to navigate a confusing and repetitive narrative. 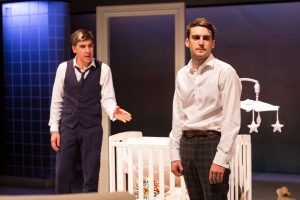 Of Kith and Kin explores the hurdles that married couple Daniel and Oliver negotiate, whilst having a surrogate child with their friend Priya. Judgement from Daniel’s mother Lydia opens up some painful childhood memories for Daniel, and in lashing out on his partner Oliver, his lack of control sets off a chain of unfortunate consequences. Played as a traditional drama, the characters are followed through three distinct locations and time periods, as the repercussions of Daniel’s outburst and the uncertainty of whether they were ready for children in the first place, builds to a predictable conclusion.

Writer Chris Thompson competently explores the unfairness that plagues couples who have children by non-biological means. Their motives, suitability and preparedness is scrutinized far more than any heterosexual couple. However, despite this fertile new social phenomenon to examine, Of Kith and Kin repeatedly rolls out incredibly traditional attitudes towards pregnancy, as well as some nastier exploitation of working class stereotypes for cheap laughs.

Daniel’s mother Lydia, played admirably by Joanna Bacon, is a shocking example of this. Despite Chris Thompson having been a social worker, and doubtless meeting and respecting many people from similar backgrounds as Lydia’s, he still manages to portray this character with such insensitivity and middle-class privilege that I can’t quite believe that this is being staged at The Bush, a place renowned for its commitment to equality. A particular piece of dialogue, whereby she describes a ‘posh french place’ they had dinner and Oliver eye-rolling points out was a Cafe Rouge, is emblematic of the lack of respect this play shows for anyone who can’t afford a two-bed flat in Shadwell. Some completely off-the-wall comments about lactation during a court room scene also left me completely baffled as to their relevance (and biological sense).

Despite a rollercoaster of life events, delivery of the show across the board seem markedly dispassionate. Character relationships and motivations are apparent, but there was a lack of authenticity in their actions which makes the play plod along. In particular, James Lance’s destruction of one of the sets was oddly half-hearted, as if he’d been told not to damage anything in the preceedings. James Perkins’ design was also fairly unremarkable, with the exception of one nifty bit of hospital curtain work that really enhances the off-stage narrative.

And yet, the play received a standing ovation from the audience, indeed it drew one audience member into the story so much he actively shouted at the characters on stage. Doubtless, there will other reviews that praise this work, and perhaps there is quality here that I didn’t see. Ultimately, too many tired tropes about being gay, an older single woman, pregnant, a parent (pick your identity) were played out with all too little to elevate it beyond cliche and predictability.

Of Kith and Kin continues its run at The Bush Theatre until 25 November. Tickets can be purchased via their website or by calling their Box Office on 0208 743 5050.