Review of: In Event of Moone Disaster

A triumph of emotional range

Winner of the Theatre503 Playwriting Award 2016, Andrew Thompson’s In Event of Moone Disaster was chosen from over 1500 script submissions to be the first play directed by new Theatre503 Artistic Director Lisa Spirling. Taking its name from the contingency letter written by the American government at the time of the moon landings in 1969, Thompson uses the theme of space travel to explore the very human trials of three successive generations of the Moone family. 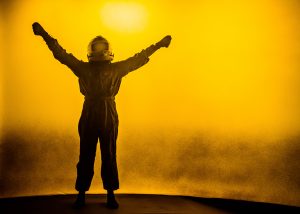 A young woman meets an astronaut at a moon landings party in 1969, and subsequently struggles to come to terms with the banality of her small town life. The second, her son, tries to define his identity as he starts a family in 2017, whilst the third, his twenty-something daughter, is severing her human connections in preparation to undertake the first human voyage to Mars in 2055. Space is used as a lens through which to understand their problems, and how the impact of an individual’s actions can resonate down through generations, and whilst topics tended to be fairly predictable – birth, death, infertility, sex – they were treated with refreshing nuance.

From the beautifully young and idealistic, to the painfully lost and grieving, Thompson weaves together his characters with accomplishment. In Event of Moone Disaster ambitiously confronts a huge spectrum of human experience through multiple narratives, pushed forward the drama with simultaneous timeline scenes. Rarely, for this type of construct, you don’t pick favourites because Thompson manages to imbue each generation with their own sympathies and depth. His writing is bursting with humour and poignancy, taking the audience through extremes of emotion with ease.

Director Lisa Spirling brings Thompson’s script to the stage with her usual talent for fashioning complete complicity between the audience and the stage. Despite tackling such a wide scope of human experience, the play never lagged, due in part to the cast’s mercurial ability to flit between characters. Among such a talented company, Rosie Wyatt (Mumburger, The Old Red Lion) particularly shone as both the first and last ‘Sylvia Moones’, and was strongly supported by a pathetically endearing Thomas Pickles, an unrequited love interest who wants her to give upon space and settle for trips to Skegness.

Sarah Beaton’s blank, curvaceaous grey stage offered useful levels for the piece, whilst neatly side stepping any continuity problems. Briefly brought to life by short bursts of video projection, it was Richard Hammarton’s sound design that arguable had the most resounding impact. Shockingly loud at times, his use of rocket launch sequences and slightly tongue-in-cheek vintage ‘space themed’ records perfectly enhanced the emotional soaring points of the production.

It is worth noting that this piece feels eerily similar to Alice Birch’s Anatomy of a Suicide (Royal Court, 2017). From characters going through fast choreographed costume changes on stage, to projected dates to keep track of the timelines, and more importantly the generational content, they have a significant amount in common. Whilst no artistic production can be an island, and Birch’s production is recent enough to be a coincidental sister of In Event of Moone Disaster, those who have seen both will doubtless by struck by the similarities. And yet, this is not at all in disservice to Thompson himself, as his script certainly holds up to the comparison, and it will be interesting to witness his rise.

In Event of Moone Disaster will continue its run at Theatre503 until the 28th October, with performances at 7.45pm Tuesdays to Saturdays, and matinees on Wednesday and Saturday. Tickets can be purchased via their website or by phoning their box office on 0207 978 7040.