Underbelly and Westminster City Council are delighted to announce their enchanting programme of festive entertainment for this year’sChristmas in Leicester Square. The spectacular programme of live yuletide entertainment, taking place in a beautiful Belgian Spiegeltent in the very heart of Central London, is made up of two strands:

Firstly, for the grown-ups there’s Cabaret at Christmas, featuring festive delights from a host of the finest entertainers in the biz, including legendary cabaret supergroup Fascinating Aida, darkly atmospheric Parisian circus Black Cat Cabaret and tantalising masters of their craftHouse of Burlesque.

Others serving up their best Christmassy fare to this feast of entertainment will be funnyman Al Murray putting his own inimitable spin on the traditional variety night with The Pub Landlord’s Festive Saloon. 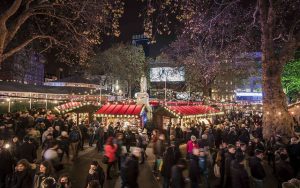 Also on the programme: all of history’s finest divas in one extraordinary vocal box belonging to Christina Bianco, comedy-variety institution The Horne Section, jazz duo extraordinaire Ian Shaw and Claire Martin’s Early Christmas Cracker, and one-man Rat Pack and big band sensation Gary Williams in A Swingin’ Christmas. They’ll be joined by West End star Emma Hatton (whose starring roles have included Elphaba in Wicked and Eva Perón in Evita), as she joins forces once more with jazz maestro Anthony Strong in Baby its Cold Outside.

The second strand offers something for the whole family; Kids at Christmas features The Showstoppers Christmas Kids Show – an entirely improvised musical for all ages from the legendary theatrical trailblazers.

If that isn’t enough, revellers with also be treated to a unique take on Charles Dickens’ timeless A Christmas Carol – returning to London after an acclaimed run at the Vaults last year – reimagined by the masters of vintage theatrical comedy The Fitzrovia Radio Hour as a 1940s-style radio drama. Also on the line-up is Roald Dahl’s Marvellous Medicine, in which Professor Tom Solomon uses the celebrated author’s tales to unlock the secrets of the human body, and Monski Mouse’s Christmas Baby Disco Dance Hall – a first ever Christmas dance party for kids 0-5 (and parents of all ages) featuring an array of festive songs, dances and games.

Another hit with the kids, returning after huge success last year, is Santa’s Grotto – open every day until Christmas Eve. This special North Pole experience will see Father Christmas himself (the real one!) regale kids with a special festive tale before hearing their Christmas wishes, having a photo with them, and giving them a special early Christmas present.Winter Windows will also return – a unique exhibition in partnership with local schools which will see pupils design stained glass windows with the best being exhibited around the north and west perimeter of the Leicester Square site for thousands of passers-by to enjoy.

In addition to this amazing seasonal entertainment, London’s iconic Leicester Square will be transformed into a wintery haven with a beautiful European-style Christmas Market with over 25 different stalls featuring a range of fascinating Christmas curios, sumptuous food and delicious drinks, all presented in partnership with Hilton Hotels and Resorts.

So, come one, come all, have a mulled wine and a pretzel, visit Santa, take in a show, and immerse yourself in a complete Christmas experience!