Review of: Waiting for Godot at the Arts Theatre

What is there left to say about this play? We all know what it’s about – nothing. And even if we’ve never seen it, Godot has so thoroughly entered the skein of contemporary theatre that it’s difficult to see its impact or the shock of its first production at the Arts Theatre over sixty years ago by a young Peter Hall. So this is a homecoming for Peter Reid, the director staging the current Waiting for Godot at the site of its English language premiere. 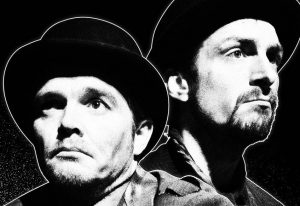 A fittingly stark stage with a barren tree reminiscent of a crucifix and a rock. That’s it. The words supply the rest. The void is the true setting. Dishevelled tramps Vladimir (Nick Devlin) and Estragon (Patrick O’Donnell) wait for an acquaintance whose apparently imminent arrival looms over proceedings. They are unable to move on for fear of missing him. They wait. And wait. And, you guessed it, wait. A latter day Dismas and Gestas await their Redeemer.

Godot – God. The association is obvious. Perhaps too obvious (Beckett certainly thought so). Nevertheless references to the Lord in the play and this production abound. Reid doesn’t shy from this or the play’s longueurs, although there can be a little too much gurning from the actors playing for laughs, calcified by time and touring – some of the cast and crew have worked on this production for over a decade. Beckett understood the inane ironies of the actor’s life.

The pair, engaged in puerile humour, auto-erotic asphyxiation, and suicide attempts soon exhaust each other’s company so it is somewhat of a relief to be rudely interrupted by the overbearing Pozzo, played with stentorian command by Paul Kealyn, and his long-suffering slave Lucky, a physically adept Paul Elliot. Fortunate he is not, subject as he is to his master’s petty whims and a volley of porcine epithets. Roped like an animal he cannot escape his fate either. Kealyn puts to mind the Anglo-Irish class dichotomy with his rambunctiously aristocratic Pozzo. The pair keep mistaking him for Godot – even the assonance of the names is undeniable.

The second act is a repeat of the first. ‘Didi’ remembering everything, ‘Gogo’ forgetting everything. Completing each other like an existential Laurel and Hardy, including bowler hats, they drive one another crazy but are inseparable. These idiot-savants are forever uttering profundities. Does God pity us or even care about his creation? How does one live when the world is nothing but boredom, diversion, ennui, and insignificance? Is life merely awaiting death? It is not for the play to answer these questions perhaps merely to raise them is enough.