Review of: Thebes Land at the Arcola

Knowing play that is often too clever for its own good

Theatre has long had an intimate relationship with prisoners; rehabilitation theatre workshops are run all over the world. Inmates understand the acts they have to put on, even to get there may have seemed like a series of auditions. It’s just that nobody ever told them they could amount to art. Uruguayan playwright Sergio Blanco’s prisoner’s tale Thebes Land returns to the Arcola to kick off the CASA festival of Latin American playwriting. 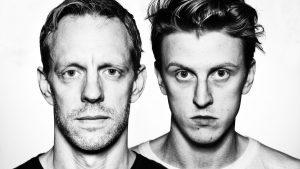 A three metre high cage, a bench, and a basketball hoop- this prison confines Martin Santos. The young offender is incarcerated for a horrific crime with the four CCTV cameras monitoring him broadcast onto screens above the audience. To watch the solitary Martin in split-screen dribbling a basketball, pacing, or sitting down is oddly hypnotic. His fellow player in this two-hander enters cautiously – known only as ’T’, he is visiting the prison to interview Martin in an attempt to write a play. With the intention, so we are told, of having Martin reenact his story on stage night after night. Specifically, his crime. A patricide. Stabbing his father. Twenty-one times. With a fork. Dead.

Trevor White’s ’T’ also plays the role of compère using a genial charm to introduce his protagonist, the project, and its obstacles. His easy loquacity is in contrast to the inmate’s terse replies. His culture juxtaposed with the prisoner’s philistinism. But the play itself is less Kiss of the Spider Woman and more Shawshank Redemption.

The patrician references come thick and fast – Mozart, Dostoevsky, Roland Barthes – all of whom had troubled relationships with their fathers. Freud (of course), Kafka, Pasolini, and Saints Martin and Sebastian bring up the rear. Proceedings are leavened somewhat when Whitney Houston’s I Have Nothing blares through T’s iPhone during a recurring reenactment scene. First as tragedy then as farce.

Eventually ‘Martin’ disappears to be replaced by ‘Freddie’, the actor who will play Martin on stage. T intertwines their own fictions with Martin’s facts. Sadly, RADA-trained Freddie’s segue into his delinquent doppelgänger is often incongruous. Alex Austin is too crude to allow the transition to be anything other than contrived, kissing his teeth and clipping his vowels like all those urban crimes he’s familiar with.

Martin, like Dostoevsky, has epileptic visions – like old Fyodor he suffered his first seizure after the death of his father. This is where the play lost me. A tyrannical father who abuses his child and spouse verbally and physically; a mother, presumably unable to endure, dead from cancer. A medical condition that afflicts his personality. Complete social ostracism and one or two other miseries I omit from exhaustion. Exonerating Martin, clearly the writer’s intention, could have been done at a fraction of the surplus misery. The effect is comical – how much suffering can one human endure? He’s had a horrible life. We get it. Oedipus at Belmarsh.

Blanco, unable to resist, inserts one highbrow leitmotif after another, as though the quotidian details of Martin’s story or the banal meetings with him require poetic intercession to make them worthy. The cultural accretions obfuscate. Is everyone who murders their father really an Oedipus? You know that cancer Martin’s mother died of; it was uterine – as in, ‘cursed is the fruit of thy womb’. An inversion of the Hail Mary prayer. Which is also invoked, twice, once in French!

Ironically then the tenderest moment in the piece is when T helps Martin with his eye drops. In their first touch T ends up cradling him in an image evoking Pietà. The artificiality does not undermine the affect. This is a very knowing play that is often too clever for its own good, however Daniel Goldman’s wry adaptation saves it from becoming insufferable. Just.