Review of: The Simon & Garfunkel Story at the Lyric Theatre

Price:
From £18
Reviewed by: Alex Wood

A note-perfect performance of the classics is let down by an uninspiring show structure.

My love of Simon and Garfunkel operates on two levels. First and foremost they have a personal resonance, being a band that I turned to during stressful periods – long walks home singing Bridge Over Troubled Water to myself, a young man growing up on the rural outskirts of Birmingham, quickly spring to mind. But secondly, the pair’s central relationship, a fractious and fraught one at that, was so compelling, so enthralling, that I digested hours of content. In a way the relationship was quite wondrous – two individuals, capable of creating so much exuberance and beauty in their music (to the extent that they filled Central Park in the 1980s for their free concert) having an intrinsic and sustained dislike for one another. You can see it in their (especially Art’s) body language – the pair just didn’t get on.

Of my two loves for the pair, the former was certainly satisfied by the Simon and Garfunkel Story, which has one-off performances at the Lyric Theatre on Shaftesbury Avenue every month until December. The two performers, Sam O’Hanlon and  Charles Blyth, capture the brilliance of the duo perfectly, inhabiting the roles rather than impersonating them. Blyth’s Garfunkel is particularly uncanny, while O’Hanlon manages to make Paul Simon’s accomplishments on the guitar look like a natural skillset. The realism hums through the theatre. Though it’s hard to pull out highlights, the buoyancy of their “Cecilia” especially stood out. The quiet melodies of “Kathy’s Song” were also enchantingly understated. 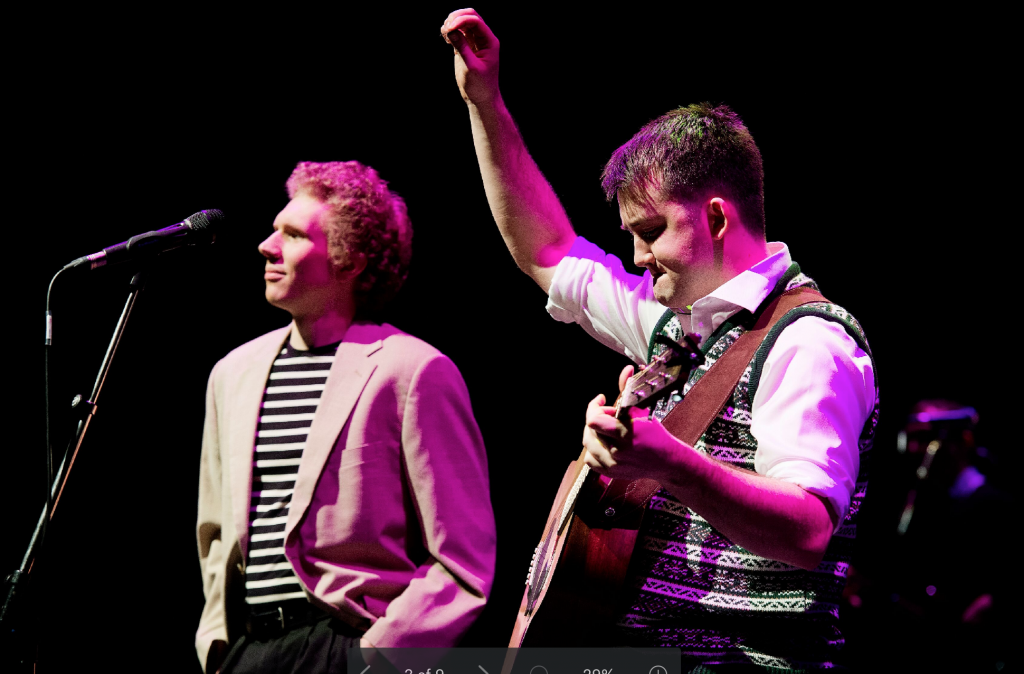 But it was on the latter of my two loves that the show seemed to fall down. While billed as the “story” of Simon and Garfunkel, the show fundamentally felt like a chronological cycle through the hits, jumping from album to album with whimsical breeze. It was less of a story and more of a run-through of the greatest hits. A shift in structure would have benefited the pair perfectly – rather than relying on chronology, place the pair’s temperamental relationship at the heart of the show and let that be the driver for the performance – this was where the greatest fruit grew. The punch of the Boxer would have been more keenly felt, while the release of Bridge Over Troubled Water would have been a refreshing relief for the audience at the end of the act. The emotion felt, fundamentally, lost by the end.

So every kudos must go to the beautiful performances involved, and the show could be quite readily rectified, but this was a performance with an intrinsic problem – it took two of the most emotional performers of the last 50 years and sapped them of some of the magic. A tribute to the music, but not, unfortunately, to the musicians.