From Les Enfants Terribles theatre company, the creators of Olivier nominated immersive smash hit Alice’s Adventures Underground, comes Inside Pussy Riot – a story that needs to be experienced to be understood. 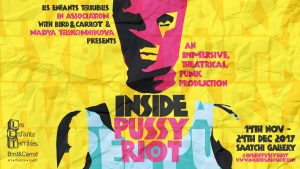 Coinciding with the Saatchi Gallery’s Art Riot: Post Soviet Actionism exhibition and presented in association with The Tsukanov Family Foundation, Inside Pussy Riot is an immersive experience, about Nadya Tolokonnikova‘s tribulations as the founder of Pussy Riot, the post punk, feminist art collective who stuck two fingers up at the Russian system and suffered the consequences. To mark the 100th anniversary of the Russian Revolution, audiences are encouraged to pull on the balaclava and stand up for what they believe in. Stand in the dock as Pussy Riot and live the realities of incarceration through this exhilarating theatre experience. Would you sacrifice everything for the sake of a punk prayer for a freer world?

The immersive world of Inside Pussy Riot seeks to remind audiences what actually happened and how one’s basic human rights and freedom of expression can be taken away at any point. Nadya Tolokonnikova comments, Inside Pussy Riot shows you what prison, prosecution of political activists and police oppression looks like. It also reminds you what democracy, on the contrary, looks like. And when I say ‘democracy’, I mean real democracy, which is about direct participation of citizens. Inside Pussy Riot plunges you into the totality of an authoritarian system – if you do not choose real democracy and participation, authoritarianism chooses you.

Writer and Artistic Director of Les Enfants Terribles Oliver Lansley comments, We’re so excited to be collaborating with Pussy Riot on this experience. Our plan is to provoke, challenge and make our audiences understand the experience Pussy Riot went through whilst also encouraging  them to ask important questions about their own beliefs and what they might do if they found themselves in a similar situation. Freedom of speech is one of the most important contemporary values we have and one we often take for granted

Tickets will be going on sale via See Tickets on Wednesday 27th September at 10am.