Review of: The Knowledge at the Charing Cross Theatre

With a generous sprinkle of thick cockney accents, The Knowledge is a riveting celebration of London and the legendary institution that are black cabs.

The only point of criticism I would raise on this show is the following: I will never be able to look at a taxi driver in the same way again. From now on, as I heal a cab and I watch the driver following the route dictated by his phone, I believe I will inevitably feel a note of disappointment. I won’t be able to help thinking that, no more than a few decades ago, all this was done without any help – because back then people had “the Knowledge”.

Adapted from Jack’s Rosenthal TV play by Simon Block, and under the passionate and accomplished direction of Maureen Lipman, The Knowledge is a brilliantly contrived piece of theatre. “The Knowledge” in question is the notorious exam that all aspiring taxi drivers had to pass in order to qualify as black cab drivers. Which, in figures, involved knowing over 15,000 roads by heart. And back in 1979, when the play is set, this was done without sat navs, Google Maps, Citymapper, or any such tool.

At a time in which the brand Uber has become synonymous with the vehicles that take us everywhere, and the company itself is making the news for its multiple scandals and attempts to grapple with them, the subject matter could hardly be more topical. At the heart of The Knowledge are a legendary challenge, the vicissitudes of the candidates attempting it, and most of all about an unconditioned love for a city and its topography. In a nutshell, the show is a love song to London, played with a Pink Floyd tune (indeed, apt songs were chosen even for the interval). Relevant, funny, and a bit different, the play exploits the full potential of the TV film comedy turning it into a remarkable performance. 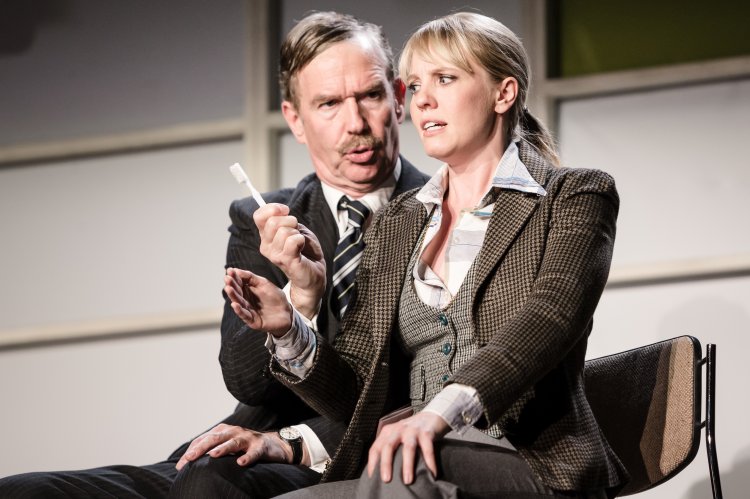 Not only is the play entirely topical, but it also proves superbly crafted in several (if not every) aspect. Outstandingly in character, and hilariously eccentric, is cruel (?) examiner Mr Burgess (Steven Pacey), which steals the show. Equally convincing is Janet (Alice Felgate), in the role of the aggressively tender girlfriend, who pushes her beloved Chris (Fabien Frankel) to take the fearsome test. As the other four sub-plots unfold, we witness how much people get moulded by “the Knowledge”, and how wonderfully the cast is able to reproduce the psychological nuances of their characters’ changes. Pushing people to their limits, by the end of the play “the Knowledge” will reveal who’s got what it takes to succeed, and which relationships are strong enough to endure the test. 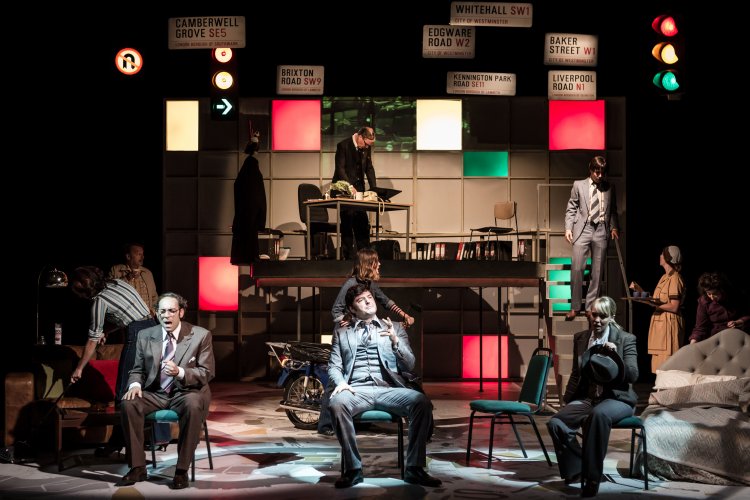 Even down to its minutiae, the show appears neat and accurate. From the Mondrian-esque, traffic-light-inspired set design by Nicolai Hart-Hansen, to well-researched stage props and costumes, the play is faithful to its ’70s setting. With a generous sprinkle of thick cockney accents, The Knowledge is a riveting celebration of London and the legendary institution that are black cabs.

The Knowledge runs at the Charing Cross Theatre until Saturday 11 September, Monday to Saturday at 7.30pm, with matinees at 2.30pm on Wednesdays and 3pm on Saturdays. Tickets can be booked on their website or phoning their box office (08444 930 650).