Review of: Our Great Tchaikovsky

A compelling concept, but aesthetic choices and clumsy writing means Our Great Tchaikovsky fails to stun

On paper Our Great Tchaikovsky seems a curious affair – a one-man show of the famous composer, integrating some of his most beloved pieces and baring his soul to the public. A biographical one-man piece with piano soundtrack, so to speak. Sadly, this production does nothing to lift the bemusement that accompanies the programme, taking what could be an intensely interesting concept but failing to give it the subtleties suggested by the subject matter. 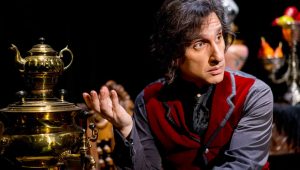 Hershey Wilder is a performer of two halves – triumphant on the piano but relapsing into stereotypes when focussing on Tchaikovsky himself. The portrayal of the composer himself is sadly two-dimensional, relying on a Russian accent and some oddly placed set pieces to try and carry the narrative. Blatantly plastic candles, bizarre chairs and rather stereotypical ‘Russian’ paraphernalia scattered around the stage seem as if they’re meant to convey a sense of the period; sadly, the setup feels more as if we’re stumbled into a cheap Russian souvenir shop. Huge pieces of furniture clutter the stage, a picture frame cycles through portraits of the characters mentioned in the story – all to apparently no effect whatsoever. The sheer amount of stage dressing also only serves to obscure a gorgeous projected backdrop that is totally capable of communicating space, place and period by itself. Considering that the only item physically being used in the piece is the piano itself, the design tends towards the overkill.

This aesthetic confusion influences Wilder’s characterization of the composer himself, the sense of faux-Russian constructed by the design pervading the acting as well. The writing isn’t particularly scintillating, but carries the plot well enough, imparting information with precision and clarity. It is the music itself which is the star of the show – Wilder’s playing is not the subtlest (the piano certainly does feel like ‘a beast to be tamed’), but provides a wonderfully dramatic focus. It is a shame that the piece didn’t focus more on the subtleties and contradictions within Tchaikovsky scholarship instead of attempting to wring a fictionalized account from his life that doesn’t feel like it measures up to the man himself. The composer’s ‘disposition’ (sexual orientation) lead to a rather clumsy comment on the treatment of homosexuals within modern Russian society; a wonderful parallel, but one that feels somewhat shoehorned in.

While having a strong backbone based on a potentially compelling concept, Our Great Tchaikovsky is far too awkward and ungainly to constitute a proper examination of the composer. The clumsy set and lighting choices (bright green LEDs with some pink rotating gobos at moments) don’t help carry writing, and despite Wilder’s authoritative piano playing this is a long and confusing 100 minutes.