Review of: Follies at the National Theatre

This ambitious revival of Sondheim's 1971 musical is a triumph. 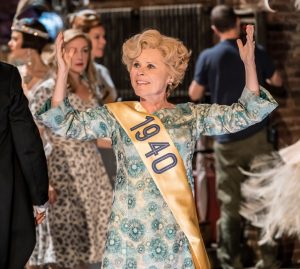 Fortunately, Dominic Cooke’s revival, at the National’s Olivier, pulls it off with aplomb.

Set in a dilapidated theatre, soon to be replaced with an office building, the show centres around a reunion of ‘Weisman girls,’ ex-showgirls from the theatre’s glory days. The women and their husbands immerse themselves in a nostalgic connection with the past—Sally, Buddy, Ben and Phyllis’ younger selves are as present as their modern counterparts. Cooke’s direction of the young characters has them observing and interacting with their older incarnations—looking into the future as much as their aged selves look into the past.

This is a musical that prompts reflection on the choices we make, our mistakes, the thrill of youth giving way to financial and marital strain. As Ben, played excellently by Philip Quast, sings: “The door you didn’t try/Where could it have led?”

The company is a thing of beauty—its diversity, energy and array of talent quite exhilarating to see—and, whilst there are certainly starring roles, this is non-hierarchal cast. Imelda Staunton and Janie Dee impress with performances that I will remember for a long time to come—Staunton as the chronically heartbroken Sally brings a stunning pathos to ‘Losing my Mind’, and Janie Dee as Phyllis is a joy to watch with her dry humour and sassy musical delivery. Classic Sondheim favourites ‘Broadway Baby’ and ‘I’m Still Here’ are performed to rousing perfection by Di Botcher and Tracie Bennett respectively.

Add lavish costumes and magnificent choreography (especially on the breath-taking tap-dance number ‘Who’s That Woman?’), and it becomes difficult to find fault with this revival. The loose plot might not be to everyone’s taste, but it’s impossible not to be impressed by the components, and the decision to run at 2 hours 15 minutes without an interval allows for total immersion in the show’s world.

Follies concluded with a standing ovation from the audience and the excitement on the way out was palpable. I urge you not to miss out on this delicious treat—but you may have to fight to get your hands on a ticket.

Follies runs at the Royal National Theatre until 3rd January 2018.