If you like your theatre with a grand side helping of conga lines, dramatic uplighting, crackin’ jazz solos and are not really in the mood for a complicated plot, then this sure is the one for you.

Fast-paced, upbeat and blazing with energy, Five Guys Named Moe at the Marble Arch Theatre is the epitome of a good night out. Once you get past the stage of expecting a plot and settle into the barrage of jukebox numbers beating you around the head it’s a raucous success. 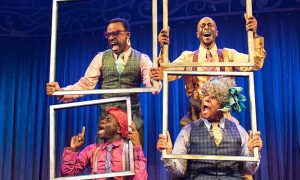 The piece is little more than a showcase of the songs of Louis Jordan, a pioneer of the jazz genre. After first being seen at the Theatre Royal Stratford East, Five Guys took a trip around the world to Broadway and has now created a rather snug little home for itself right next the Marble Arch in the center of London. And one can easily see why it’s done so well for itself – its main aim is simply to give the people watching the best time possible. And in this it 100% succeeds.

The general outline of the show follows no-gooder Nomax, having lost his lady and wanting to win her back (I say ‘general outline’, this is basically the entirety of the show). The piece gets a heady injection of jazz, craziness and diva-ness when five guys called Moe – Big Moe, Eat Moe, Four-eyed Moe, Little Moe and Know Moe – burst out of the radio in order to teach him of the error of his ways. While this might seem like a rather bizarre beginning, the entire piece is generally just an excuse to whip out all of the classic Louis Jordan songs and have a glorious party onstage. The venue, brand spanking new Marble Arch Theatre, is decked out in slightly similar fashion to the larger New Orleans jazz clubs –  tables in the bullring facing the stage, the rest of the audience sat around the side in the bleachers. A catwalk-style strip encloses the seating area, allowing all the Moes to strut their stuff in all their wonderful, campified glory.

The true joy of the piece lies in the glorious choreography by Andrew Wright and the truly fantastic performances by Nomax and all the Moes. If you like your theatre with a grand side helping of conga lines, dramatic uplighting, crackin’ jazz solos and are not really in the mood for a complicated plot, then this sure is the one for you.