Review of: Around the World in 80 Days at Cadogan's Hall

This super-slick theatre production is not to be missed. Go to see awe-inspiring physical tricks, engaging characters and a fast-moving story that whisks you round the world in a few hours of exuberant theatre.

If you have nowhere to travel to this summer, then I strongly advise you to journey as far as the Cadogan Hall to catch this superb piece of total theatre. In this fast-paced adaptation of Jules Verne’s Around the World in 80 Days, you will be whisked on a journey of the world with the inspired creativity of the 8-strong ensemble for company. You will witness elephant and sledge rides, steamer crossings and many train journeys all brought to life by means of playful and ultra-slick physical theatre. The fight scenes, conducted with more than a metre’s distance between foes, are worth going back to see a second time. 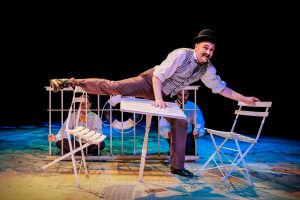 Dennis Herdman as Inspector Fix in Around the World in 80 Days. Photo: Andrew Billington

Gestated in the New Vic Theatre in Newcastle-under-Lyme under the superb directorship of Theresa Heskins, this production is full of those little details that come from creative studio time. Passports and money are flung across the room using an old music-hall trick, chaotic scenes fall into slow motion, characters are fully rounded with creative ticks and quirks.

There are virtuoso performances by the actors playing the lead characters. Michael Hugo is a comic genius as Frenchman Passepartout with awe-inspiring physical ability. Dennis Herdman is a joy as inept Inspector Fix, the police officer who chases Phileas Fogg around the world in the misconception that he’s the man responsible for a bank robbery. And Andrew Pollard is a suitably stern Victorian Phileas Fogg, who’s hard edge softens when he saves Mrs Aouda (Kirsten Foster) from a controlling Indian tribe.

The show begins with a wonderful piece of repeated choreography showing the clockwork life of Fogg, a man of habit. His days always end with a game of whist at the Reform club. It is during one of these evenings that he agrees to take a bet that he can circumnavigate the globe in just 80 days. He departs that very night with his new valet Passepartout and a bag of £20,000 in bank notes to finance the trip.

The various modes of transport that Fogg and Passepartout use are created in a simple and slick way. A train carriage is made by actors sitting opposite each other on trunks and donning items that tell us where they are journeying through – a baguette and berets for France, ice cream and boaters for Italy. A ship is made with a white rail and the swaying of the performers and the furniture (which becomes a very funny scene in itself at one point). The movement from one scene to another is seamless under the inspired movement direction of Beverley Norris Edmunds.

The music, composed by James Atherton, and James Earls-Davis’ sound design is very much an integral part of the show. The non-contact fight scenes are much more funny because of the sound effects on the score and the music leads us through the different cultures and countries we encounter.

The set, designed by Lis Evans, is simple but effective, with a staircase and platform built of trunks and luggage providing another playing level and projections clearly indicating to the audience where the characters have arrived. The elegant backdrop of the Cadogon Hall itself, seems entirely fitting, adding some additional period grandeur.

For fast-paced enthralling entertainment, make this show top of your list of things to see in London this summer.

This show is running at the Cadogan Hall from the 2nd August to the 2 September 2017 before a national tour. Tickets can be purchased at www.cadoganhall.com/event/around-the-world-in-80-days-2017