Review of: EdFringe 2017 - Out of Love at Summerhall

Within the Roundabout, perhaps one of the most democratic spaces at the Fringe, surrounded on all sides with very few spaces to hide, Cook succeeds in spades.

Elinor Cook has some serious clout under her belt nowadays. Extra Yarn, Pilgrims and Ten Weeks have all proven her capacity to create nuanced and powerful characters, something that Out of Love seeks to continue. Within the Roundabout, perhaps one of the most democratic stages at the Fringe, surrounded on all sides with very few spaces to hide, Cook succeeds in spades.

Indeed the Roundabout is a daunting place for a writer. With few props or room for manoeuvre, the writing lies exposed, open to interpretation or dissection. Only the lighting and sound can distract an audience member (as it too frequently did during Brad Birch’s Black Mountain, this play’s repertory sibling at the same venue) so you really test your mettle. In a way it’s rather exhilarating for a pundit. The transaction is raw.

So Cook constructs the lives of Lorna and Grace, two female friends growing up together. We see them from before birth right the way through to the end – a friendship completed, lives lived in tandem. Cook, as is expected of many shows these days, dabbles with chronology to maximise dramatic resonance. Boyfriends, pregnancies, careers, insecurities, all are delivered in a whirligig of raw emotion and anxiety.

Some elements are too absent – the mentions of Grace and Lorna’s mothers, sporadic and sparse (perhaps for the sake of a final conclusion), feels like an untapped avenue, while Hasan Dixon’s male multi-roling meant there were moments where I mentally conflated boyfriends and brothers – brief befuddlement before continuing with the drama. 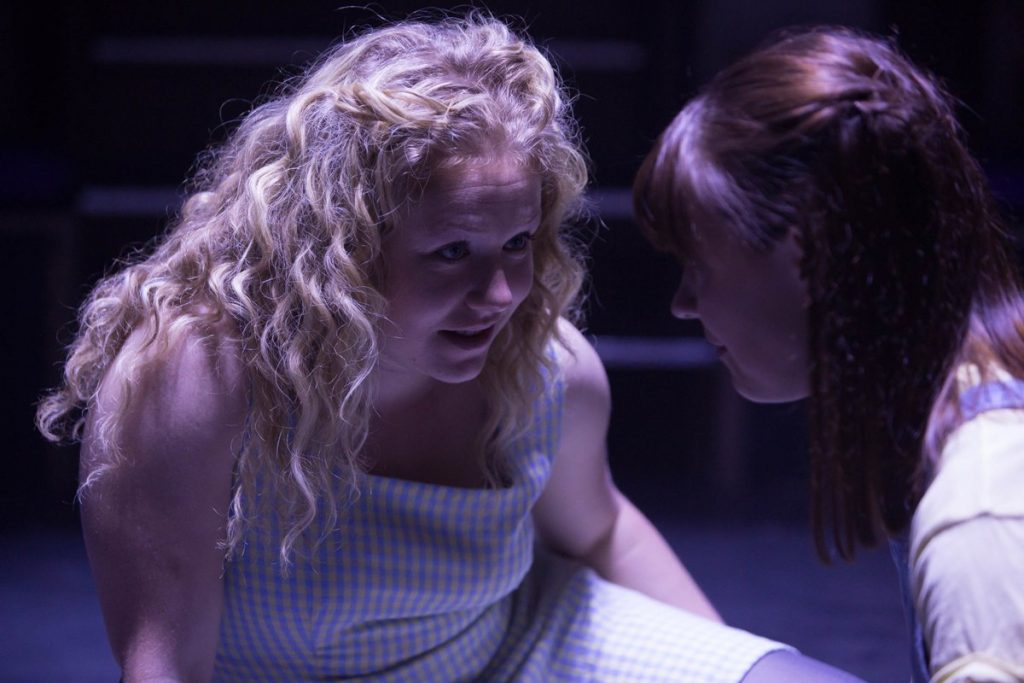 Overall however Dixon’s roles are token-istic, only there to exacerbate this central relationship between the two female leads. And this is where the real power in Out of Love lies – Sally Messham (having a huge amount more to do here than in Black Mountain) and Katie Elin-Salt (as commanding as she was in Mountain) building a complex relationship – often harmoniously beautiful, while at other times entirely destructive. The pair simultaneously hamper and help one another. They argue and disagree to their very core, but can equally love and share. It’s a nonstop push-pull scenario. Cook has fermented the text with inevitable bile and tempest, relinquishing the tension in some moments to become more sedate, chirpy.

The drama may be slightly hyperbolic (reading back through the text, lines like “The baby won’t love you and you won’t love it” seems far too extravagant, yet through a deliberate restraint and a moderated crescendo from director James Grieve it clearly worked, as I didn’t notice this during the show) but it aspires towards a tangible realism – a female friendship, philia. A love so rarely depicted on stage. One of Cook’s lines, delivered by Grace, leapt out of the plot and into a wider debate:

‘Do you think maybe people don’t understand what it can be like?
That fire.
Between two women.’

A highlight of the Fringe.