Punchdrunk International and co-producers SMG Live today release a cinematic trailer to celebrate the 200th performance of their award-winning production of Sleep No More in Shanghai. The film offers a rare glimpse of the sell-out show and is available to download here. 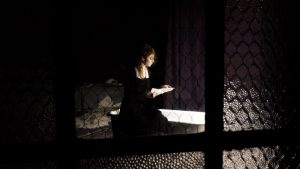 Sleep No More broke all box office records when it opened, becoming the fastest selling theatrical production in the city. To date, over 58,000 tickets have been sold. Tickets are currently sold out until the end of September, with more due to be released soon. Whilst still in its first year, Sleep No More is already the third longest running show in Chinese theatre history. It has become a trail-blazer for British theatre finding success in new territories.

The Sleep No More experience is closely guarded by the company. By sharing the cinematic trailer, audiences who may not get the chance to see the show in Shanghai can take a look at the ambitious production.

This is the first time an immersive show of this size has been performed in China. To create this production, the original creative team have collaborated with Chinese co-producers SMG Live and Chinese artists. The production shows the world of 1930s Shanghai in sumptuous cinematic detail, and has attracted a devoted network of followers, some of who have seen the show more than 70 times.

SLEEP NO MORE is performed by an international company, including many long-term Punchdrunk collaborators alongside a host of some of the most exciting and innovative performers China has to offer