A heartwarming youth theatre production of Neil Bartram's wonderful musical Pinocchio. The British Theatre Academy provide a committed and talented cast of young performers for this delightful retelling of the classic Italian story. You will leave the theatre humming the songs and energised by all the youthful vigour.

A heartwarming youth theatre production of Neil Bartram’s fantastic musical Pinocchio begins its summer run in the West End. The show is produced by The British Theatre Academy who provide a large cast of children and young people ranging from age six to late teens. Heading up the young team are professionals Martin Neely, playing a lovable Geppetto and Lizzie Rees as the narrator/blue fairy. 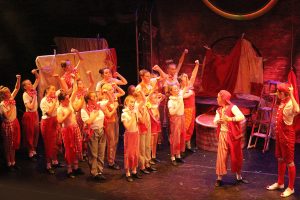 This musical retelling of the classic Italian tale of a wooden puppet who turns into a boy is full of charm and morality. The show opens with some fine shadow puppetry before we get whisked into the world of Pinocchio. His misadventures see him working as a puppet performer, getting conned by the wily Fox and Cat and being seduced into the land of boys  – the Terra Di Rigazzi. The big Terra Di Rigazzi number is one the most powerful and enjoyable in the show. He then ends up with his father in the belly of a whale, cleverly constructed from parachute fabric, where he proves that he has the love and empathy needed to become a real boy.

The children work incredibly hard as the ensemble in this well-directed and choreographed production and master the sometimes complex musical numbers well. The casting of the lead roles changes depending which show you watch to give the maximum number of young people the chance to shine.

On press night Nathaniel Purnell gave a stalwart performance as Pinocchio, but the real standout performances were from Tilly Hopkins as the devious Cat and Tabitha Knowles as the manipulative puppet master. There was also a virtuoso transformation from boy into donkey performed by James Sampson as Lampwick and a delightful puppet duet by a couple of the young dancers, Jessica Brown and Alice Bonney.

The adult roles were played with polish and finesse by Neely and Rees with Neely performing Geppetto’s numbers with great subtlety and soul.

The skill and commitment on the stage should motivate any young people in the audience. If you are looking for a summer show to take the kids to that delights and inspires, this is it.

This show is running from the 28th of July to the 31 of August 2017. Tickets can be purchased at www.theambassadorstheatre.co.uk