Review of: NewsRevue 2017: Fifty Shades of May

While 2017’s is throwing the world twists straight out of House of Cards or Black Mirror faster than previously thought possible, NewsRevue’s brand of clever irreverence is an excellent vehicle by which to make sense of – or at least have a laugh about – the chaos coming out of today’s politics and media.

The Guinness-World-Record-holding, longest-running live comedy show in the world, NewsRevue, returns to Edinburgh – where they have already won the Fringe First Award – for a new show based on 2017’s infinitely mockable world events.  The company, usually based at London’s Canal Café Theatre, currently comprises four talented performers unafraid to rip into the joyful and painful (or sometimes both – this is Donald Trump, Kim Jong-un, and Fake News, after all) realities of today.  In the span of an hour, they somehow make the DUP’s sudden say in the government, the general lust of Macron and Trudeau, and ISIS’s struggle against the apathy of the average British person completely comical. It is a breath of fresh air in a Black Mirror reality. 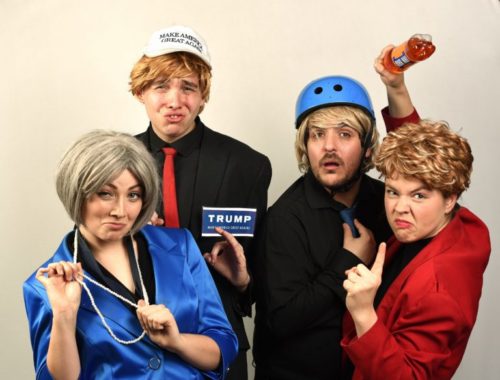 The company seems at an advantage this year; 2017’s world affairs provide ripe material to mock and spoof.  That said, the show’s greatest struggle this Fringe may be staying relevant throughout its four-week run; while all songs and most set pieces feel like they will hold up for the month, some of the gags already feel played out by press and pundits.  An example is a transition joke centring around Sean Spicer’s resignation last month; as the punchline is based on a potential replacement, the user of Spicer instead of Scaramouche or another more recent Trump casualty seems underwhelming.  With the furious pace of current events today, one hopes that they will edit a few comic anecdotes to fully exploit their biting humour.  However, if they do not, the show will still offer a strong night of entertainment.

To spell out the details of the parody pieces – both in content and form – would ruin some of the show’s most hilarious moments.  Suffice to say that the juxtaposition of ISIS, nuclear missiles, and the plight of state-school teachers with immediately recognisable pop melodies and sketch formats is a delightful, if dark, one.  Opening with a General Election number is a strong move, and a running gag featuring Theresa May’s inability to say anything of sense is possibly the highlight of the night.  For the locals in the audience, there is much about Scotland and Sturgeon’s place in the UK and EU following Brexit – whether the broad accents or content got more laughs is debatable, but the humour was excellently delivered.  Lastly, an entirely irreverent closing song and bows ensures that no one is safe from the company’s barbs.

While 2017’s is throwing the world twists straight out of House of Cards faster than previously thought possible, NewsRevue’s brand of clever irreverence is an excellent vehicle by which to make sense of – or at least have a laugh about – the chaos coming out of today’s politics and media.  This Fringe classic has returned for a reason, and it is not a show to miss.