Review of: The Majority

An engaging, funny and sometimes disturbing 90 minutes of theatre that involves the audience voting on several outcomes or simply just voting to gauge a sense of what the majority is like on the night you are watching. Certainly a night to remember.

Part one-man show, part 21st-century morality play, part live-voting game show the Majority, Rob Drummond’s new production at the Dorfman, will be a lesser experience if you read this review. Better to go in knowing little of what will happen. So don’t read on if you don’t want the experience marred by spoilers. 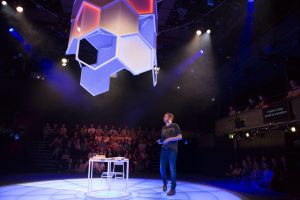 Drummond takes as his story the tale of his encounter with a socialist Scot called Eric who he meets in George Square the morning after the Scottish referendum. Drummond has a secret that he is scared to share – he didn’t vote. He hopes an encounter with this vehement activist might make him into the political animal he feels he ought to be and so when Eric leaves his wallet in Drummond’s hand, Drummond does everything he can to track Eric down and return the wallet.

When he finally catches up with Eric he gets caught up in the man’s paranoia about neo-Nazis taking over his town and led to do things he might not otherwise have done, including an act of violence.

Running in parallel to this tale, and at times influencing how much we hear of it, is a live-voting set up that sees Drummond directly pose questions to the audience, which they can answer with the push of a button on their voting devices. Press 1 for yes and 2 for no. Jemima Robinson’s design sees a circle of light on the floor become a Countdown-esque clock, while a structure of hexagons that represent the hive(mind) is also reminiscent of the game show Blockbusters. After a musical punchline the answers are delivered on monitors positioned around the stage.

As a warm up Drummond asks a few National Theatre monitoring questions to determine how much of the audience is white, female, liberal and voted remain in the Brexit referendum.  He claims he wants to “get to know this community a bit better because each audience is different”, although it will be interesting to gather in the results at the end of the run and find out just how similar they are.

The audience voting system is at its best when the audience feels like it has real power, like whether or not to let latecomers into the theatre, or whether or not Drummond presses send on a comment on a “live” website. These votes generate much more excitement in the room than the moral problem of the runaway train that the audience votes on throughout the show with increasingly problematic options.

As our recent forays into referendums have shown us, the concept of “majority” is a tricky one. Last night when the majority was large the minority were palpably vulnerable, and when the majority was small the minority was clearly disgruntled. At various times during the show the minority were the non-white, the weak-bladdered and the cold-blooded (who would brave killing their own child to save five strangers). The audience, positioned on four sides of a square playing area, could be seen looking around to try to spot who these outliers were.

At its essence the show exposes the flaws in a “yes, no” voting system. At one point Drummond says to the audience “I bet you are itching to explain why you voted the way you did”, but of course there is no room for explanations. It also becomes a homily for understanding those that think and vote differently to you. Drummond has an epiphany in his mother’s living room that the feeling of being wrong is exactly the same as the feeling of being right, in that, of course, everybody feels like they are making the right decision, whichever way they vote. It teeters dangerously close to apologising for those who hold hateful views; at which point the show becomes like that runaway train, hurtling towards an outcome that needs the flick of a switch to get it back on course.

At the final vote Drummond seems visibly perturbed that 12% of the audience still believe “that abusing someone for holding an opinion is a helpful thing to do”. But, he concludes, “total agreement is the death of conversation. Is the end of thought.”

This show is running at the National Theatre from the 14 August to 28 August 2017. Tickets can be purchased at www.nationaltheatre.org.uk