In Centre17, London’s newest performance space – a hall with a small stage near Walthamstow Central tube station – Kat Bond delivered her particular brand of zany comedy to an attentive audience on Friday night. 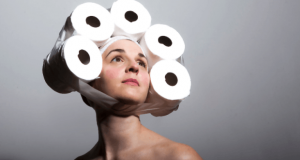 This left-field show about a loo-roller (someone who reads loo rolls like tea leaves) and her quest to find her family won Kat the Vault Festival Comedy Award earlier this year. It opens tomorrow at the Pleasance Courtyard (Venue 33) and runs until  August 28.

The premise is as ridiculous as they come. She begins the show in a bin, a copy of the one in Luton where she was dumped by her family. She has been converted to the art of loo roll reading and wants to recruit new readers from the audience. She is also on the hunt for her family. Bond is at her funniest playing characters that will make up her family, such as the holier-than-thou marathon runner who runs to escape her kids or the overzealous bin man: “I haven’t run since the mines, or the war, or some other working-class memory”. There’s also plenty of gags and some quirky impressions: “pass me the stapler” is an impression of “anyone in admin”.

The gentle audience participation is just enough to win us over. Clapping along to “I’m still standing” or repeating the refrain that loo roll is “mainly for poo” in her delightful poem about the many uses of the white stuff (stuffing a bra or sticking to a shoe). Her hunt through the audience to find her surname, trying on each character connotation for size is very entertaining.

Jenny Agutter makes a virtual guest appearance and fans of the Railway Children will appreciate the inspired recreation of the “Daddy, my Daddy” scene (with talcum powder for steam).

If you like your comedy served up with a side of tomato, then you’ll enjoy this hour of outlandish invention.