Review of: #Instalove at TheSpace on North Bridge

An entertaining encounter with four different kinds of singleton, but it didn't necessarily revolutionise my opinions about relationships.

Emerging from the calm of the Hilton on North Bridge into the coloured lights of the #Instalove gameshow was something of a culture shock. A man walking in from the street had no idea what he had stumbled into, and those of us that had read the blurb, which bills the show as “participatory” were only slightly less apprehensive. 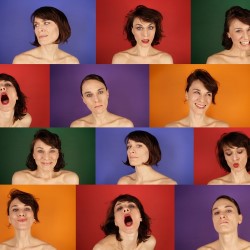 The rules were explained: we would meet four women, each represented by a piece of coloured card. After each round of the game show, which constituted dates between audience members and the women, we would use the card to vote off the woman we liked the least. I had misgivings about the “Take Me Out” format, but actually when all four women were vivaciously performed by Catherine Duquette, it made perfect sense. As audience members, we had different “types”, and voted honestly according to our preferences. Personally, I was intrigued by pragmatic Kate and straight-talking Kris, admired romantic Clare, and found out-going, sensual Cat a little overwhelming. But the audience response was in no way uniform – people voted for Cat again and again, leaving Duquette ample opportunity to raise the audience provocation stakes.

My favourite moments were in the games that involved searching questions – these characters really wanted to get to know someone. The show allows space for people to be incredibly open in their responses – I was surprised and impressed by audience members’ honest answers to questions such as, “Why did your last relationship end? Are you ready to move on?” The show successfully highlighted the different ways in which we search for love, and indeed the different interpretations of what that means. There were times, however, that Duquette, possibly just due to the characters she was playing, came across a little judgmental. This felt odd in a show that seemed to really invite honesty from the audience, and sometimes seemed to undermine the sense of trust required for a show that relies so heavily on audience participation.

It became clear towards the end of the show, with the help of some recorded monologues, that these characters were all actually aspects of one woman. There’s something fairly universal in the idea that we change according to so many different variables in our lives – who we’re with, what we’ve been through, and who we want to be and be with. I would say, however, that I’m not really sure what the show achieves beyond this. The man who stumbled in left just as bemused as when he arrived.

It was an entertaining hour, but I’m not necessarily sure it’s revolutionised my ideas about dating and relationships. However, with some prompting from Duquette in the form of Cat, I had to ask out and swap numbers with a fellow audience member. I’m sure she’ll be pleased to know that drinks were had, and I suppose I will be more open to my inner Cat in future!