Review of: All The Fun at Underbelly Circus Hub

If yesterday’s All Genius All Idiot was an attempt to dissect the ludicrous nature of circus convention,  then French company Cie Ea Eo’s All The Fun dissects the practice of juggling. Throw away your expectations, this isn’t the short of show where the climax comes with five clubs all airborne simultaneously.

Indeed, one of the earliest sequences even involves the dismantling of a juggling club. Taken apart before our eyes and seen to be a fleeting, meaningless piece of plastic. Then once again it becomes a piece of magic, balanced and tossed across the Circus Hub’s stage with professional deftness by the five strong company.

According to the company, this is a show of nothingness. Nothing in the sixty minutes means anything. Indeed one of the company announces this at the sart, All the Fun is a celebration of the things that mean nothing – earrings, funerals, circus acts. It’s a humorous take on everything at the Edinburgh Fringe. 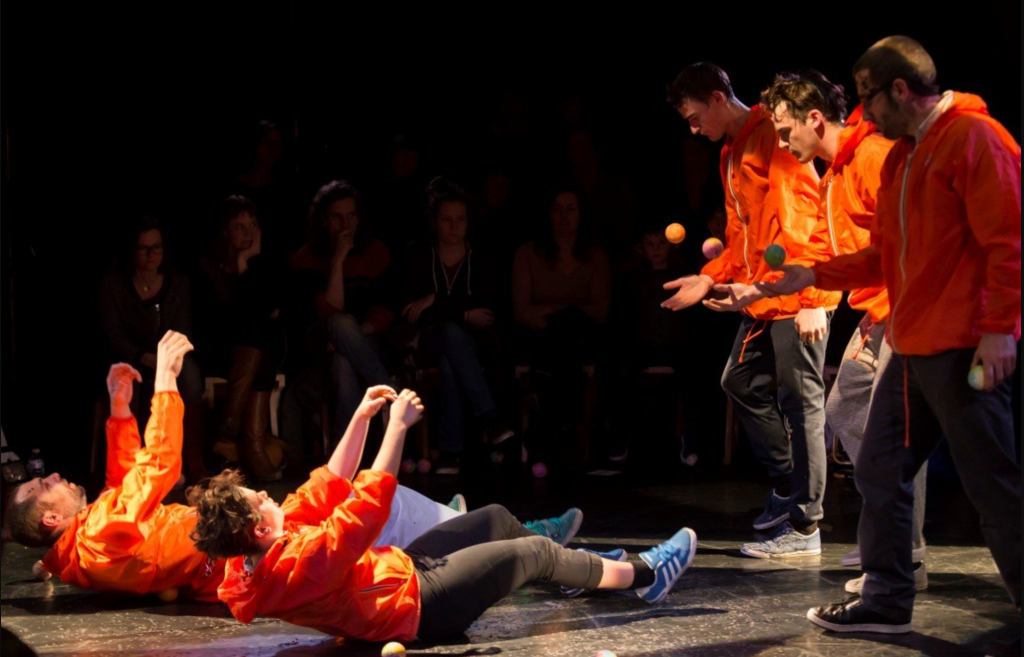 From there, almost entirely in silence, the company execute a series of different sequences involving both skill and balance. But this is neo-juggling – clubs are tapped, stacked, traded, pushed, smacked, games are played and cups on string are used. At one stage a performer lies on the floor, mic stand perched on his forehead, while another speaks into the live mic. The pair have to shuffle as the mic veers erratically, but the voice remains unbroken. It’s all about balance. The rhythms, particularly during theseprotracted moments, are mesmerising.

The issue comes in the structure of the show. For all its inventiveness and ingenue, there never feels to be too significant a climax by the end of the performance, and instead it all feels rather abrupt. Some of the middle sections end up being the showstopping moments. Perhaps a reflection of my own lack of expertise, but as an overall experience the show just seemed to stutter rather than transcend in its final ten minutes.

On the way out, I heard an audience member whisper to another: ‘I’m not even sure how to describe that’ – something that I’m sure is the best seal of approval for the company. Another elusive piece of circus performance has arrived at the Fringe. Inventiveness and revisionism seem to be the order of the day, though whether or not audiences can keep up has to be seen.