You know the drill by now. Let’s get started before the Fringe does proper. Here’s three more brilliant and brave women creating cutting-edge work at this year’s Fringe, solo. 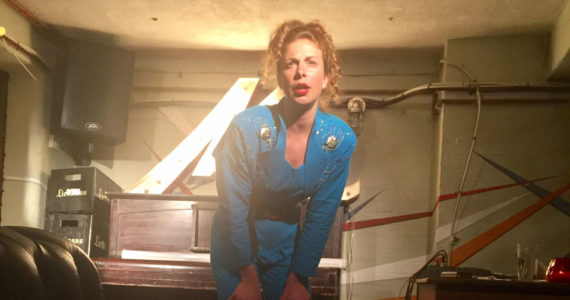 Helen Duff – When The Going Gets Duff – Assembly Roxy, 3rd – 27th (7.35pm)
Helen Duff returns to the Fringe for another comic confessional mind-spill at a thousand miles an hour. Let Duff be your inner voice for an hour and you’ll leave feeling a lot less insane. We first saw Duff a year ago at the London Clown Festival, and her stream of consciousness style is still utterly unique. She is the master of the non-sequitur – at times completely daft, and at others incisive and subversive.
Theatre Bubble: What has it been like developing your show in performance?
Helen Duff: Fantastic, I’m trying lots of new things in this show – dance, song, splaying all the voices in my mind across the stage – so the risk factor felt paralysing to start with. After playing it in front of lots of different audiences, it’s now down to a tantalising tickle!
TB: Can you give us any hints about what this show will be about?
HD: Where it’s appropriate to touch yourself in public – given the current political climate, I think people will enjoy seeing a woman stake a claim for herself on stage; celebrating yourself as a slippery fish and exploring the more erotic elements of the country dance oeuvre. Oh and scrabbling for a structure to keep yourself under some kind of control. That last one regularly gets away from me; I’m pretty off the leash with this new one.
TB: This year you’re also in the running for the Amused Moose New Act Award! Do you think there is now more space for alternative acts within mainstream comedy awards/audiences?
HD: Amused Moose has always been pretty on board with alternative acts – Alexis Dubus won as Marcel Lucount a few years back, Neal Portenza got the audience award last year. I didn’t expect to get through and there are some really brilliant acts in the final who I’m excited to see – Michael Clarke especially. I’m happy to discover such a hungry audience for alternative comedy – for a lot of people, it’s not just something weird they’re adding to the mainstream mix, but the mainstay of what they want to see.

Sara Juli – Tense Vagina: An Actual Diagnosis – Underbelly Cowgate, 3rd – 27th (4.10pm)
Tense Vagina focuses on the little-discussed aspects of motherhood – inspired by the physical therapy writer and performer Sara Juli received at The Pelvic Floor Rehab Centre for treatment of post-childbirth urinary incontinence. This show is “not suitable for children due to adult language, content and dildos.”
TB: What inspired you to create this show?
Sara Juli: My work has always been about sharing personal stories with the public. These stories run concurrently with my life.  They are my outlet for how I deal with problems that keep me up at night, but that simultaneously connect me to the rest of the planet.  Anything that is plaguing me is bothering millions of others at any given time.  For example: In my twenties, I created and performed a solo called, How to Forgive Yourself in Bed, about reconciling my promiscuous behaviour. Years later I made a piece called, The Money Conversation, about my fears around money as I began to combine my finances with my new husband.   These topics, promiscuity and money issues, to name two, are universal. Tense Vagina: an actual diagnosis addresses the next chapter in my life: being a mother to two young kids which includes the sacrifice, the adoration and the fact that your body and mind take a real toll, typically in private. The piece pretty much wrote itself, in my small NY City apartment, when I was attached to a hospital-grade breast pump and couldn’t move.   Sharing the piece with audiences is very cathartic: they laugh, I laugh, we talk to each other, and we’re all reminded of this crazy world that we’re navigating.

TB: The show has toured extensively across America. Have people responded in ways that have surprised you? Are you expecting any cultural differences in responses across the pond?
SJ: I have been completely shocked and amazed by the response to this show. I’ve had literally hundreds of women approach me after the performances and tell me crazy stories about their vaginas. I’ve learned about aging vaginas, vaginal atrophy, other treatments for pelvic floor rehab that are not addressed in the show, and more. I’ve received gifts from audience members, hugs, tears and college students telling me the show was “the best birth control” they’ve ever received. I’ll need to re-work a few jokes and lines once I arrive at the Fringe and do a little research to make sure all of the language “translates.”  When I toured a previous work internationally, The Money Conversation, I needed to do quite a bit of work to identify the humour, which certainly is cultural. I have a 22 show run to discover what resonates with the international audience in Edinburgh! 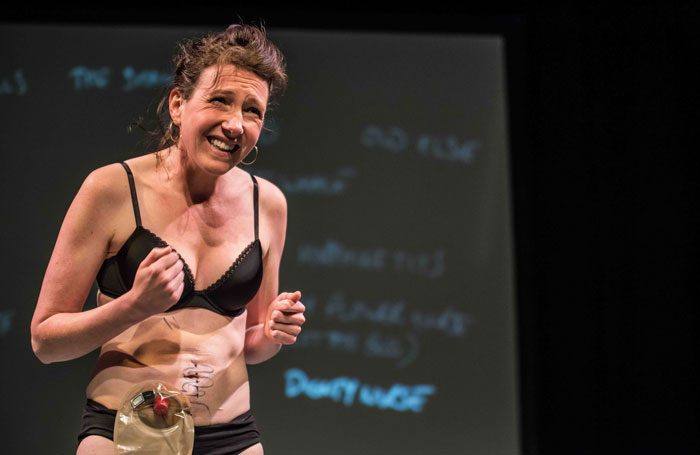 Liz Richardson – Gutted – Pleasance Dome, 3rd – 13th (2.40pm)
East 15 Graduate Liz Richardson has created Gutted to share her experiences of living with a chronic bowel condition called ulcerative colitis.
TB: You co-created this show with Tara Robinson. Can you tell us anything about the process behind the show?
Liz Richardson: The very beginning of the process was really me sharing all of my relevant experiences with Tara – the observations I had made throughout my time in hospital, the jokes I’d used in my early stand-up routine about my illness, and us making a list of what we wanted to say with the show. I think we both knew what we didn’t want it to be (a “pity-piece”) and I knew I didn’t want to talk directly to the audience “as myself”. For an autobiographical piece that could sound tricky, but it was actually a helpful rule, and guided what form the piece would take. I only speak once in the show as “me”: for most of the show the audience are “Liz” and I play a range of characters who are interacting with her. As we collated these characters through improvisation and writing together, we found there were some ideas that we wanted to communicate that wouldn’t fit within that model, so we would try something else – voiceovers, video, audience participation – and the show is now a balanced collage of these different storytelling techniques. There was a fair amount of trial-and-error, guided by dramaturgical discussion; it was intensely collaborative. The show wouldn’t exist without either one of us, and responses/ideas from our R&D audiences (one of which was a group of stoma nurses) also informed the work too.

TB: The show is an “investigation into how we think about illness and the boundaries that cause us to feel shame” – with the illness explored in Gutted being a so called hidden illness. Do you feel there is insufficient support for people, in particular performers, with hidden disabilities?
LR: I think the support you need with a hidden disability is really varied so this is quite a tricky question but in most situations I would say it’s about understanding. When going up for jobs, there is always a fear of filling in the form that says “do you have any illnesses/disabilities?” in case it discriminates you against getting it. With my illness, I can get fatigued and I can need the toilet more, but I can still do the job. What I can’t do is stay working until 11pm for example! So I think if there is anything that we can do to support performers in our industry with hidden disabilities, it is to be understanding and open about what their specific needs could be. With Gutted it’s been relatively easy because the show is about my illness so it’s obvious to the whole team that it’s going to sometimes be a factor. But when it comes to it, I’m still able to do this job and I’m doing it, and that’s one of the strongest messages that the show puts out there: it’s possible to have an illness and still do it – watch me work!

WHO ELSE?
There are of course hundreds of fantastic female performers at the Fringe and we couldn’t interview all of them. Here is a quick rundown of some of our other favourites: