As the Fringe draws to a close we thought we’d leave you with one final Fringe Diary, as Nathan Lang gives us a dose of his Fringe mayhem!
Here’s Nathan’s account.
Day 21:
“Should be flyering more, but I’m settling for half-full shows, which is fine because we’re all having fun. The show before me finished late and I was in such a rush to set up I forgot my watering can, so I had to use a mime sprinkler system to extinguish the mime fire on my audience volunteer. Inspired by last night’s improv clown show, I pushed further with one of my elevator bits to create a boxing match between myself and a giant bird. Came home for a nap and instantly the physical exhaustion set in. My body is tired but my spirit has never been so energised. 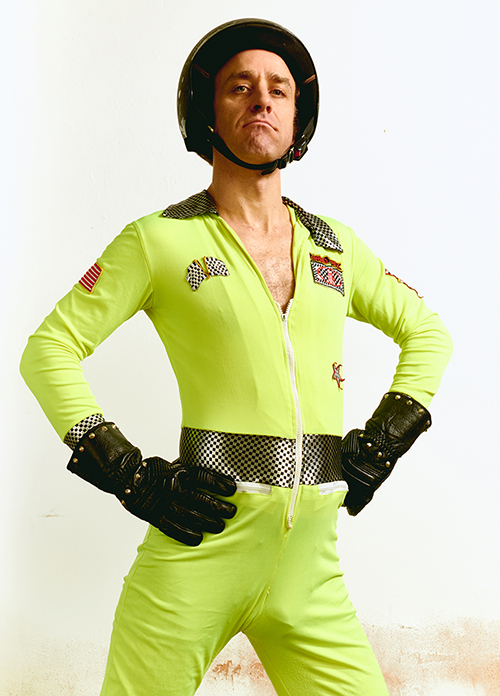 Scoffed some food and did Hard Mode, where I missed a cue at the end and it felt like the whole show stopped to wait for me walk across the room into the mime jail and apprehend Louise Reay. Degraded myself in someone else’s show.
Straight to the So You Think You’re Funny finals to see Esther Manito smash it on a massive stage and was proud of her. Sat with Pete Nash, who had perspicacious insights on getting to know a comedian in a 5 minute set. Realised that Blue Moon is just a lager top.
Stopped on the way home to chat with homeless guy Rob on The News Steps. He was so lovely. He used to have a good job. I asked how the homeless community fare during the Fringe. He said hostel prices and bookings go up so they get forced out onto the street, but the council don’t support them and police encourage them to move on to make Edinburgh’s homeless problem less visible to tourists, although begging is legal. Three support centres get turned into Fringe venues during August. An English tourist abused him for being in the way. Rob wouldn’t say it but I did and I can because I’m Australian: “Fucking English”. I told him about the Free Fringe and he said he felt uncomfortable about going to a free show because you have to pay and no-one wants a homeless guy in the audience. I told him that’s bullshit, it’s the Free Fringe. It’s free. It is for people like him with no money. Really encouraged him to come to my show and I hope he does. We joked about me getting him up as a volunteer and saying “This is Rob the homeless guy I just met!” and making him do the whole show with me as payment.

A hotel concierge gave him a bottle of water and some biscuits and very sympathetically suggested it was time to move down the steps away from the hotel room windows. They understood each other so cordially. Life can be like that. We have our perspective all wrong when we are lucky enough to afford to come to a festival and do what we love for a month and sell our shows as free yet expect everyone to give us a fiver afterwards. There is far too much concern about the bucket over the experience. There is something very wrong with this. How can we do free comedy yet continue to exclude the poor and disadvantaged? Not democratic. We should be including them, it is their city we commandeer for a month. I now have a mission for next year.
Walked home and flopped on the bed knackered. Dragged myself upright for an intense admin session. Seymour baked a cake. Went to late-night Sensitive Bricks and we drew a good crowd of drunks willing to be steered into a basement. Went out with last night’s character Pickled Piper, but it became a completely different act of a surreal fantasy tour guide. Missed the big laugh cue to leave the stage and outstayed my welcome by two bits. Had a very enjoyable microphone game with Luke and wished I could play with him more. We had a live keyboardist and I started to improvise a song about the dodgy microphone connection called “You Gotta Hold It A Certain Way” but the microphone connection was dodgy so it fizzled out. I obviously didn’t hold it a certain way.
I’ve found so much freedom doing Sensitive Bricks, and having a brain made of mushy peas is the perfect state for clowning because my head is no longer getting in the way of impulse when I’m on stage. Finally the lesson has dropped into my body of stepping out with nothing but a proposition so you remain highly sensitive to finding the game. Went to bed with a list of other people’s flyers to collect in the next three days to get the whole set.