Part of the free Fringe’s charm is that it can offer hidden entertainment that sometimes rivals the big acts in the larger, paid venues. Sadly, the efforts of Dino and Andy are anything but magic.

The stand up duo are simply not convincing – ‘improvised’ is one thing, but ‘unrehearsed’ another. With poor material, weak asides and confused quips they generally missed the mark. Andy had positioned his microphone too close to his mouth so boomed and distorted most of his dialogue. And while friendly to participating members of the audience the duo were seemingly slow witted when looking for a pen or recording answers. 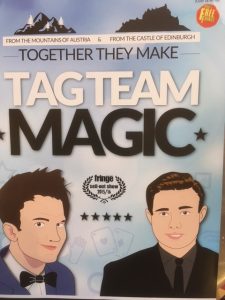 Between the two players the patter was sluggish and, while picking a biology student, (the participant had the potential to be golden material) they were never sufficiently in top of the act to fully exploit the moment. The word association was painfully slow and unimaginative. Their tag responses were lacking any edge – one saying ‘take your time’, the other replying, ‘nice and quick’. With no variation of pace and little vocal delivery another moment fell on stony ground.

There was a lackluster effort to get the audience involved with ooos and ahs resulting in, yes, you’ve got it, a similarly lackluster effort from the audience. Apathy can be catching! Then there was a flash of comedy with a Bristol joke, getting a rare laugh. However, the consequent tossing of a coin and lame banter killed the little momentum stone dead, along with muddled and slow music cues.

A clever magic trick offered the possiblity of redemption towards the end, as the duo rolled out a towel with the word ‘fringe’ spelled out clearly to the surprise of those invited on stage. Sadly though, the preamble to this impressive moment was littered with mumbled lines and half-baked quips. detracting from the awe that could have been inspired.

No magic here then, but some creative ideas at play and with rehearsal the act could be sharpened up into something worth watching.