Review of: Sugar Baby at Summerhall

An entertaining hour with a skilled performer, but the play lacks depth and bite.

Marc is a small-scale drug dealer from Cardiff, who owes an unsavoury former schoolmate £6,000. This makes for the opening premise of a madcap tale that we are told from the start will involve Vicky Park, murder, and a seal. We know what we’re getting into. 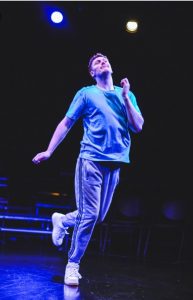 Alex Griffin-Griffiths gives a humourous, bombastic performance as Marc, with seemingly endless energy as he bounded around the stage, recounting events at rapid pace, whilst interacting warmly with audience members.

Unfortunately I felt the play itself did not quite land, and Griffin-Griffiths didn’t quite succeed in elevating it. I wasn’t sure what the main take away should be – was it about working class Cardiff? Was it about drugs? Was it about relationships? These areas all felt underdeveloped, and it was unclear what the focus of the play should be.

In particular there was a notable lack of development for the “Sugar Baby” of the play’s title. Lisa is Marc’s love interest and just happens to be paid to date Oggy, the aforementioned unsavoury schoolmate, hence making her a “sugar baby”. She felt at times like a figure of mockery, especially with the caricature of girliness shown in Griffin-Griffith’s hair-fiddling portrayal of her. Yet she packs the final punch, and I felt more could have been made of her character before then.

In general, tonally I think it was just a little confused – it was part gritty portrayal of drugs culture and part forray into absurdism with the talking seal statue. I found the show entertaining, and I enjoyed Griffin-Griffiths’ performance, but I found the script itself a little lacking in depth.