Review of: Speaking in Tongues at the Pleasance Courtyard

30 swivelling chairs pack the Green in the Pleasance Courtyard. Upon taking our seats we’re immediately told to ‘own our swivel’, resulting in young and old alike gleefully spinning around cackling before the lights go out. Hugely fun, yes, but this gimmick loses its focus during Speaking in Tongues itself, leaving one wondering why the company went to the colossal effort. 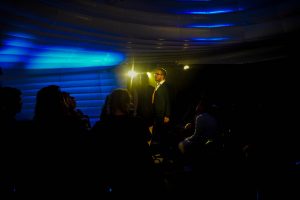 My main issue wasn’t the swivel itself – we owned our swivels. It was the swivel combined with these of very naturalistic, interlocking stories that took place squashed around the outside of the tent, constricting movement and making what could be an interesting piece rather static. Instead of any meaningful powerplay, the actors were stuck struggling around awkwardly-placed office chairs, impacting their acting and seemingly offering no benefit whatsoever.

These two pieces can be seen as separate shows, but I would strongly advise seeing them together to ty and cheat out an illusion of a conclusion. The Lies focusses on two married couples, each cheating on their partner with the spouse of the other – a ridiculously well-organised wife swap, if you like. There is some tentative discussion of the monotony of married life, of different types of love, but then the show seems to forget it should be watchable as a stand-alone piece and spends the last 20 minutes attempting to convince the audience to come back and watch the second part. A suspected abduction is hurled at us with a quarter of the show left to go and then the lights go up. I do appreciate shows that don’t feel the need to tie everything up neatly at the end, but Speaking in Tongues: The Lies left me so utterly confused as to why the team has chosen to tell those stories in the first place.

Speaking in Tongues: The Truths functions in a similar way, and yet has much more substance to it than The Lies. The most interesting pieces of The Lies are picked up and developed – a woman going on holiday and never coming back, a man leaving his shoes on the beach. One does start wondering why this was a two-part piece to start with, why the team didn’t put all of their energy into The Truths and develop it to the extent it deserves to be developed. The same applies to the chairs – every story would have worked so beautifully in traverse, giving the actors rooms to touch, to move and interact while keeping the idea of voyeurism that arose with the form.