There seems to be a rather tech-heavy theme emerging at this year’s Fringe. While this makes sense from a commercial point of view (selling shows that include interesting technical element is a sure-fire way of getting audiences in the door), shows like Séance remain rather difficult to ‘rate’ as they don’t follow the same rulebook as more traditional theatre. The tech element is so beautiful, so mind-blowing that it deserves all the glowing adjectives it can garner, true. However, the show is the tech element; there is very little else to discuss. The whole premise of the piece is to rob you of visuals so the aurals can completely consume you without any distraction, transport you into a world defined and created by sound. It is almost filmic in the way that it is presented, a pre-recorded rollercoaster full of the wonders of binaural technology but lacking any human or emotional element that makes theatre so explosive. 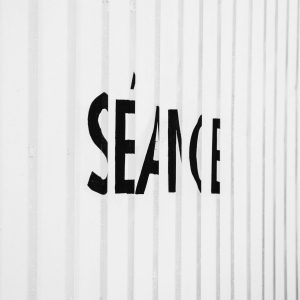 I would almost be tempted to label it as an exhibition rather than a theatrical experience. Twenty people sit in a pitch-black shipping container, slip on headphones and allow themselves to be absorbed by an invisible figure asking them to ‘believe’ – believe in spirits, in fear, in being by yourself, completely alone. The aurals are so good that it is completely impossible to recognize whether the speeches are pre-recorded or whether there is someone in the container with you, impossible to tell what is ‘real’, what is ‘fiction’. Fellow audience members are heard conversing with said invisible figure; I still have no idea whether this actually happened or whether we were all sat there in utter silence, eavesdropping on completely non-existent exchanges. As an academic experience, one that makes you question what makes something ‘real’ or not, it was fascinating.

However, creating a show so reliant upon tech can be a curiously isolating, shallow experience if it does not include a human factor – I left Séance suitably impressed at the skill of the designers but, personally, completely unmoved. Showing us one element in such a stripped down way is gorgeous, is impressive, but does cut away what I love about the theatrical medium – the interaction of so many different departments, people, specialities.