It’s already reached that point of the Fringe. Today, while completely sober, I watched a man dressed as a furry green monster sing opera alongside a chorus of meth lab workers dressed in their underwear. And I really enjoyed it. 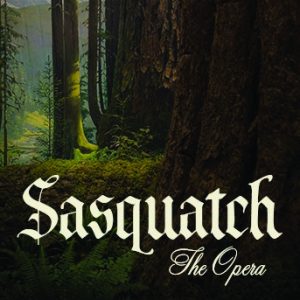 Sasquatch is just pure, wacky, unbelievably Fringe. It is so utterly bizarre, so completely nonsensical that you just give up; any sort of academic analysis would be futile. It reminds me somewhat of Prokoviev’s For The Love of Three Oranges, another helter-skelter journey where logic is suspended along with disbelief and you just buckle up for the ride. Composer Roddy Bottom, keyboard player in heavy metal band Faith No More, admits that he was intrigued by the concept of the tortured, monstrous individual with frailty at its core. While being part of its subject matter, this also seems to be a rather apt metaphor for the entire piece itself. It is so bizarre and monstrous you’re tempted to make a judgement after the first scene, however, the more the opera progresses the more you find yourself drawn in- seduced by the twisted visuals and dissonant vocals, no matter how ridiculous the whole show at first seems.

The general plot, in terms of what’s present in the marketing, already seems somewhat odd. The monster Sasquatch falls in love with a girl called Dodder, escaped from her father Fodder, with an addicted brother Brodder who suffers a meth withdrawal in the forest. And if this already sounds slightly off-piste to you, the costumes and general set design admirably decide to go the whole hog, leave the ski resort completely and jump off a cliff. I fail to see why Sasquatch (also known as BigFoot) necessarily needed to resemble a hedge in want of a prune, but I loved it. I don’t understand why all the meth lab workers (in a forest lab led by a blind man called Samson) had blinkers on and were wearing nothing but underwear – but I didn’t really care. The music had this peculiar habit of tuning in to one’s heartbeat, pulsing synth and booming drums dragging you away to a twilight world of BDSM-type dog collars and poisonous berries made of string. Resistance was futile.

That isn’t to say there aren’t some faults – light shining through the stage door SR rather ruined a lot of entrances and exits, and there were a couple of muddled musical entries from the offstage meth lab chorus (of course). However, the whole package, no matter how bizarre, just worked. If you’re up for an unforgettable Fringe experience, this one’s definitely for you.