The Rat Pack entertain in style

21 theatre has, over the past 3 years, become one of leading producers of music and musical theatre at the Edinburgh Festival Fringe. Their production of The Rat Pack is currently at C venue 34 and it provides some high-class entertainment. 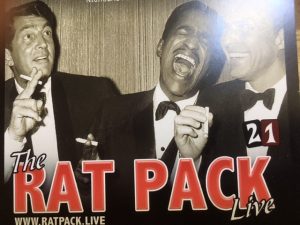 The boys are back in town !

Rat Pack maybe but this is no sinking ship. This pack of young individuals sing and chat their way through the concert, accompanied by a 12 piece band under the tight musical direction of Ashley Jacobs. The piece is directed by Jo Parsons with real style, capturing a range of moves and steps, gestures and expressions that give what could be outdated material a sense of fun, that echoes a time gone by.

A glitzy backdrop ensures a nightclub feel to the whole experience and the performers are suitably relaxed and affable with their repartee. Hugo Joss Catton opens the first set as Dean Martin. With drink in hand he delivers pacey dialogue, pitching the punch lines with just enough slur! The band have a great swing feel and the opening allows for a terrific brass section to display their talents, which gets the audience in the mood. Catton has an expressive face and does a good line in self-deprecating humour. He makes the most of his banter with the audience and his suitably relaxed and confident vocals leaves sufficient space in the lyric to tease the audience with corny jokes – giving the performance a nice sense of period. He slips and slides vocal phrases capturing a sense of character and delivers good foot-tapping moments. Such a combination of skills provides for a super smooth performance.

Then comes his old mate Sammy Davis, played by Alistair Nwachukwu; stylish, debonair and delightful. He can swing the rhythms and deliver a lyric with a lightness of touch. He works well with the band, especially feeling the sax solo and building on it to finish with a flourish. Equally impressive was his scat phrasing that really captured a sense of the vocal skill Davis had. The bespectacled Nwachulwu oozes style and sophistication. He is light on his feet and worked the dialogue in with a relaxed charm to the delight of the audience.

Up next, old blue eyes, who jumps at the chance to mix it up with his old friends. Here Frank Sinatra is captured by the young, fresh-faced, lyrical, Jamie Chidzey. He has a relaxed and easy delivery with vocal phrasing that rises and falls with a real feel for the lyric. His rendition of classics like ‘Set ’em up Joe’ was delightfully poignant capturing a sense of wry humour. In contrast his ‘Luck Be A Lady’ was big and bright. Chidzey has the musical confidence not to force the voice so belting the classic hits just doesn’t happen rather he communicates them with a real sense of musicality, suggesting he respects the material big time. That’s what the production has in bucket loads – respect! It is a tribute to great writers and musicians and these guys share that with their audience.

The lead vocalists are supported by two female backing singers. They too capture the period in their stylish frocks and delightful harmonies. At times they sing solo but the audience wanted to hear more from them. Their vocal support on ‘New York’ really added to the joy of the piece.

21 theatre have produced a great evening’s entertainment; easy on the ear and the eye, capturing a time gone by with style vocal dexterity. See it and revel in the talent of a company on top of their game.