Review of: Oresteia: This Restless House at the Edinburgh International Festival

A modern tragedy of epic proportions: Oresteia is not for the faint hearted

I approached This Restless House with apprehension: having booked before appreciating the show’s length, I was unsure I could stomach an experience of such epic proportions. It is testament to the immensity of Zinnie Harris’ writing and its direction by Dominic Hill that not one of the four hours of their collaboration makes itself felt. 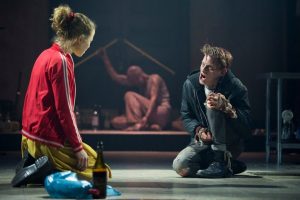 Harris has taken Aeschylus’ tripartite epic Oresteia and spun it into three new and modernised strands. Part One, ‘Agamemnon’s Return’, opens with Clytemnestra ­– a washed up glitzy singer in this version – still bent on avenging the daughter sacrificed at the hand of her husband. ‘The Bough Breaks’ sees this taste for revenge inherited by remaining children Electra and her brother Orestes, then wrought over Clytemnestra at its end. Only in Harris’ final part, ‘Electra and her Shadow’, is the family line purged, after Electra descends into insanity or is haunted by the curse of her parents.

It’s refreshing to see Harris take liberties with the Greek epic, spotlighting female roles and making the tragedy feel natural in a translation that’s very much twentieth century – the 70s to be exact. Colin Richmond’s grungy design and a magisterial pop score by Nikola Kodjabashia help. Set for the most part in a boozy village hall, there’s also a forest that descends from the ceiling and makes for the grandest spectacle of the production. Neurotic itching by actors onstage is accompanied by scrapes and screeches on strings in the background; haunting vocals permeate throughout.

True to Harris’ textual innovation, a pair of superb female performances carry the play. Pauline Knowles deftly blends fragility with a threatening and unpredictable quality. Her hysteria in Part Two is chilling and entirely convincing. But Olivia Morgan as Electra is the stand-out. As the troubled teenager of Part Two, Morgan expertly builds a naïve sulkiness that crescendos to derangement by the play’s conclusion. Ultimately, this is her tragedy.

It wasn’t all immaculate. As a trilogy This Restless House can feel disjointed: there’s a long leap of time between Part One and Two, while Part Three picks up directly where its prequel left off. Plot continuity is most sustained between Parts One and Two, with Part Three providing the boldest departure from Aeschylus. Joining too late to feel fully developed is the story of Electra’s similarly troubled and parallel-fated psychiatrist (played by Kirsty Stuart).

But the play’s jumbled quality adds to a chaotic texture that is its lifeblood. Obviously Harris has prioritised the creation of a trio of distinctive narratives over the forging of a connection to run between them. It takes immense skill to pack three subtly different, incredibly exhilarating pieces into a single production, without losing overall coherence. This Restless House comes within reaching distance of dramatic over-load but halts just in time: it is an exercise in stamina and in avoiding self-indulgence.