A macabre myth that can't quite contain its own imaginative power

The North! The North! is a darkly comic fable – a kind of gothic folk tale remembering a time that never was. It is set in an alternate history where a fissure has split the North and the South of England into two separate lands, and in which the North has become a wild, mythical place where men remove their skins to stalk the moors as monsters in the moonlight. It is a world where a pub can sprout legs and travel, so that it is never in the same place, and a world where (we are told) Margaret Thatcher was killed by giants. In the ruins of this split nation, a man tells a story of revenge.

Christopher Harrison is not only the writer and performer of this enchantingly inventive piece – he is also the illustrator. Throughout, animations spill out across the stage, turning it into a living graphic novel. The first time that a single beady eye materialises onto a piece of wood that Harrison is holding is just magical. These animations are used to not only provide a world for Harrison’s grotesques to live in, but also dramatically underscore the action – spilling blood across the stage, or creating a shower of regurgitated eggs (don’t ask). They are vital to the mythic quality of the piece, filling it with all the wonder of a cave painting coming alive in the light of a fire. Summerhall’s Demonstration Room gives the show a perfect eerie quality, although this is at the expense of clarity in the echoing cavern. 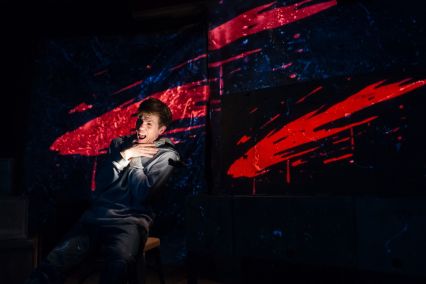 Harrison’s imaginative scope can not be faulted – this is easily one of the most inventive narratives to hit the Fringe this year. The problem is that it feels like an hour-long adaptation of a ten-book series. We can’t ever get enough of this world, and so much is left unexplored. I could happily spend hours reading about the world of The North! The North! and it feels like the possibilities of this world are never fully realised in Harrison’s show. There are stunning setpieces – particularly brilliant is the story of a man who turns his arm into mincemeat to feed his parents – but the story fails to hang together, glossing over some crucial details whilst padding out other parts of the show with considerable filler. For a story about a journey – to home, to yourself, and to destiny – it takes a long time to get going.

It is a disappointment, because Harrison is clearly an immense talent with a fertile imagination. He is a mesmeric minstrel, throwing himself into the story and across the stage with a sweaty, fully-embodied commitment. Sometimes, the multiple roles who pepper the sidelines of his tale merge into one – but helpfully, most of them are missing limbs, which helps to keep things clearer.

I hope this isn’t the last I see of the eldritch England of The North! The North! It clearly has a future – I’m just not sure if the stage is big enough to hold it.