Mental’s power lies in its simplicity: one man’s story of his mother’s lifelong struggle against Bipolar disorder

Having considered myself a person who takes an active interest in mental health issues and experiences, I was struck watching Mental by how precious little I know about Bipolar disorder. Besides telling an incredibly powerful – and tragic – personal history, Kane Power’s heart-rending show lifts an overdue veil on the disease affecting 6% of Brits. 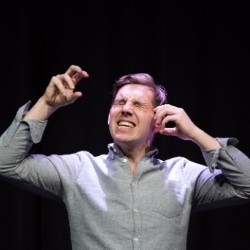 Mental’s power lies in its simplicity: one man telling the story of his mother’s lifelong struggle against her Bipolar induced hyper-manic, often psychotic episodes. Kane’s voice shifts deftly between roles. At times he is a kindly teacher or doctor, reading out symptom reports with cool detachment, at others baring deeply personal memories: the time his mum danced on glass, when she hurtled Kane and a new friend down the motorway screeching prophesies, last year’s ‘merry Bipolar Christmas’.

Kane never flinches. The level voice with which he can recount these crippling stories is as heart-breaking as raw emotion which he allows himself only sparingly. True, as he yells ‘I’m fine, I’m fucking fine’, we get the sense that he might just not be, but the show isn’t hysterical and that’s what makes it most compelling. Kane refuses to veer towards sensationalism. That might be because, for he and his mother, Bipolar really is just a routine fact of life.

There are moments that hover on the edge of the over-dramatic, though. Interspersing Kane’s storytelling are songs which manipulate his voice live via synths and a loop pedal, blasting it through the auditorium at full volume. In the end, though skilled, these booming episodes do little more than drown out the simplicity that pervades elsewhere. Neither lyrics nor music were strong enough to warrant their volume.

Kane should trust that his story alone is enough to keep us gripped. As he stands on stage, clipping emblems of each memory to a visual map of his mother’s disorder, he has our full attention. Still more, Kane has our respect.