Review of: Above the Mealy-Mouthed Sea

Lyrical but overlong: Above the Mealy Mouthed Sea struggles to arrive at a climax

At the hand of a less charismatic performer, Above the Mealy Mouthed Sea might fall flat. It’s a story of provincial life and an hour long exercise in missing the punchline – which might well sound tedious, except that the tireless energy of poet and frontwoman Jemima Foxtrot keeps the whole show moving apace. 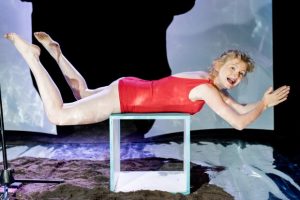 We begin with a joke about one boy and his fish. Within seconds, that has devolved into one very long, very meandering reflection on life lived beside the sea – appropriately conjured by the dark and slightly dripping caverns of Underbelly.

Childhood memories of a small coastal village are brought to life in caricatured impersonation, then accompanied by musical soundscapes which Foxtrot records live on a loop machine. Interspersing those are tightly choreographed physical sequences: Foxtrot sitting, fishing, gutting the catch, or plunging through the sea in her bright red swimming costume.

It is spoken word that carries the performance, however. The poetry (co-written by Foxtrot and her director Lucy Allen) is lyrical and complex: tough to follow as a story line but beautiful if you let it wash over you like the watery backdrop Foxtrot draws from. Things get a little chaotic when words are layered only just audibly over music, but it’s a chaos that’s undeniably atmospheric.

On the other hand, an hour does feel too long to sustain that level of confusion. The show begins to drag after the mid-point and you’ll probably find yourself longing for that punchline after all. A judicious trim should add to, rather than detract from the poetry’s intensity.

In the end, Above the Mealy-Mouthed Sea struggles to arrive at a climax: it has energy and lyricism but no real substance. Unholy Mess Productions should be commended for some daring decisions, not least their commitment to weaving multiple narratives instead of a single story. It’s a shame that that comes at the cost of achieving any satisfying resolution.