The set was called ‘Open Arms’ as Kwame was sharing the recent changes in life which he was having to come to terms with. Much of the furrow ploughed was the usual stuff, love, loss, money and social media. However, this tall, strapping young junior doctor, with family from Ghana, brought a new dimension to the  topics with personal material about his height, colour and culture – not to mention the anecdotes from his profession on the side! 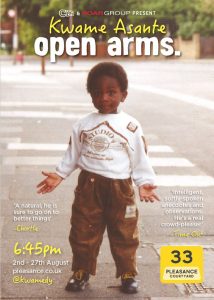 Kwame is an appealing and warm individual who is able to mock political correctness while at the same subtly pointing out its need. His gap year sketch about volunteering for overseas aid only to be mistaken by African villagers as someone who was in need of it themselves was funny and perceptive. There was  lots of fun to be had around the situation of being first generation Black British, but could have been developed further as his characterisations and descriptions hit the spot with the audience. It’s a relief to have the delivery without any black caricaturing but simply told as is. He has a light touch and can switch from the serious to the inconsequential with a flick of the hand or a smile as broad as a church pew.

His medical career also offered fodder for the stage as he recounts experiences with patients as many would say inappropriate things, but Kwame has the confidence to air them without rancor and draws us in gently to see the denigrating world of racism. He is a well spoken man with a sunshine personality and I suspect his patients are lucky to have him in attendance. We were also lucky as Kwame recounted his tales of moving to Birmingham and joining the only ladies tennis club in town. So politically correct were they that no one liked to say anything!

The material about securing the rented flat and finding a girlfriend was well paced, but the flight into fancy, a Nazi nightclub moment and the Adele story worked only as well as it did because he had the audience on board but certainly that section needs further refinement. However, he was not in any way downbeat by a half hearted response as he comes back a storm , recounting a story about his mobile phone and a urinal – I leave the rest to your imagination.

Better still, catch if you can, he’s good now but he has the potential to be truly great – a pity as medicine will no doubt miss him.