I can’t think of a more appropriate audience for an hour long burlesque on the worst of thespian stereotypes than the fringe ­– that collected mass of the nation’s thesps. Sure enough, Joseph Morpurgo has no trouble coaxing laughs from his Pleasance auditorium: Hammerhead had us all in stitches. 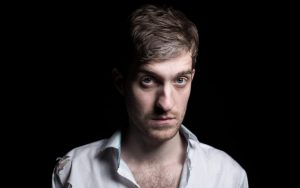 The conceit is simple: Morpurgo plays himself in the post-show Q&A to a radical new reimagining of Mary Shelley’s Frankenstein. A reimagining in which Morpurgo plays all 85 characters, in 12 different languages, across a performance lasting nine hours. As Morpurgo walks us through the intricacies of his ‘process’, we’re given snippets of the production and sidelong glances into the life of its increasingly neurotic creator.

The performance is delightfully flamboyant but rigorously executed. Even after wild exaggeration Hammerhead manages to preserve the feel of an organic Q&A, making the satire that little bit more biting. Questions are distributed amongst audience members, with names collected at the start of the show. Morpurgo effortlessly balances this tightly structured routine (it’s a mammoth list of cues to be held in one head) with improvised audience interaction. As the flamboyant actor he is utterly convincing: from voice through physicality Morpurgo’s character never falters.

It’s not a flawless show. Jokes can occasionally feel repetitive or over-rehearsed and the set-up of Morpurgo’s conclusion is a little heavy handed. Since it becomes clear fairly early what the show’s trajectory is to be – Morpurgo’s downward spiral into hysteria – perhaps we ought to arrive there sooner. There is more than enough room for guffaws in the meantime, however, and Hammerhead never drags. It’s a humour that’s deeply original and refreshingly inoffensive.