Review of: A Hundred Different Words for Love

A heartfelt and humorous story 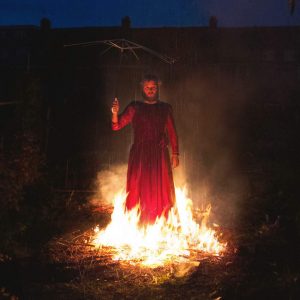 It is almost too tempting to make a pun about James Rowland, in his possibly-true-story-show A Hundred Different Words for Love, bearing his heart in Summerhall’s Anatomy lecture theatre – so I won’t, and will leave that for you to fill in instead. In this show Rowland, over the course of an hour, tells two interlocking stories about love, taken (perhaps) from his own life: his recently ended romantic relationship with a woman whose name he ‘accidentally’ lets slip, and his childhood best friend Sarah’s journey towards her wedding. Rowland alternates between the two, a live-looped soundtrack underscoring the story we eventually realise is Sarah’s wedding.

The format is intentionally simple. Rowland opens with a gambit on lowering the lights and beginning the pretence, and they dropped only fractionally. He maintains this level of almost closeness throughout the show, regularly dropping in references to his stories being entirely fictional, alongside genuine moments of love and heartbreak that prove they cannot be. The day I saw it, in his preset he took selfies and pictures with and for people, and came into the audience to talk to us directly. The show felt intimate – as if a friend were simply telling this story to a group in the pub.

This simplicity forced the show’s content into sharp relief, and it held up incredibly well. As Rowland admitted (repeatedly), the show was clichéd by nature – ‘I’m aware there isn’t much art made about love so I thought I’d wade in and nail the definitive article before anyone else tried to’ – and yet, he eloquently expresses the type of vignette that you’ve never heard before, but that is still highly familiar. The other aspect that strengthens this story beyond any potential pitfalls is the type of love it emphasizes. Rowland reminds us, through the story of himself and Sarah, that friendship itself remains one of the most important versions of love, and it is this message that sticks with you long after the show is done.