A superbly acted tale of a man and his chimpanzee

The winner of the coveted LET award, I approached BoonDog Theatre’s Goody with a certain amount of trepidation – I’ve had mixed opinions about the winners in the past. The short synopsis on the website (‘complex relationship between one man and his performing chimpanzee) doesn’t give much away, and did seem like one of those oddities only really visible at the Fringe. I read the blurb slightly dubiously, walked in dubiously and settled down dubiously. And then Lucy Roslyn scampered on stage and I was completely and utterly hooked. 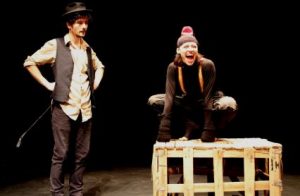 Roslyn is, quite simply, breathtaking. Goody is soulful, funny, ferocious, needy – I have never seen someone be able to communicate so much with so little. Jesse Rutherford, as her keeper Francis, seems slightly nervous at the beginning but gets into his stride, producing a wonderful double-act that is simultaneously life-affirming and heart-wrenching. The story does meander sometimes but it becomes clear that we’re not actually watching for the narrative – it is so wonderful to have the pleasure of watching a performer as confident and subtle as Roslyn that, had it just been her snooping around the stage for an hour, I’d still have left with a smile on my face.

However the piece does suffer from certain issues. Like every show, at the start we are presented with a certain set of rules by which the play functions; these are consolidated in the first five minutes. One, that the performer onstage with the black skull-cap is a chimpanzee. Two, that the guttural sounds are the way the chimpanzee communicates. Three, that Frances can interpret these. Having kept these rules for the first ten minutes, and given the audience an understanding of the world within they function, the decision to give Goody a voice, suddenly and out of nowhere, is hugely jarring. It feels totally unnecessary – Roslyn is a phenomenal performer. When snorting grunts and tumbling around the stage Goody’s intentions, no matter how complex, are totally understandable, and I do wish the company had enough faith in Roslyn’s abilities to stick with this non-verbal communication.

It is this simplicity that is the production’s ultimate strength. With a piece going on just next door containing actors walking along walls at 90 degrees to the floor, there is something intensely vulnerable and intimate about two performers sitting on a box. This is a production which showcases the rawness of emotions, and has chosen the perfect setting to do so.