Review of: All Genius, All Idiot at Assembly Roxy

An iconoclastic, bizarre experience - circus marmite for a post-circus age.

Any review of a circus act from a website calling itself Theatre Bubble need come with a disclaimer – I am not a circus expert. I do not know technical terminology, or relevant equipment. I can only judge my experiences – compare them to previous circus acts I’ve seen, and then hope that any reader finds a relevant or provocative opinion with which to contextualise their opinion of the show.

This is circus for a Fringe that is slowly but surely becoming packed with circus acts – the increasingly popular Circus Hub on the Meadows, even Cirkopolis coming to the EICC – Edinburgh has catapulted itself into one of the leading circus showcases of the summer. So it is only fitting that, while this occurs, Svalbard Company has provided in All Genius All Idiot the first anti-performative circus show – part Cabaret act, part post-modern dissections of circus tropes – all incredibly elusive. 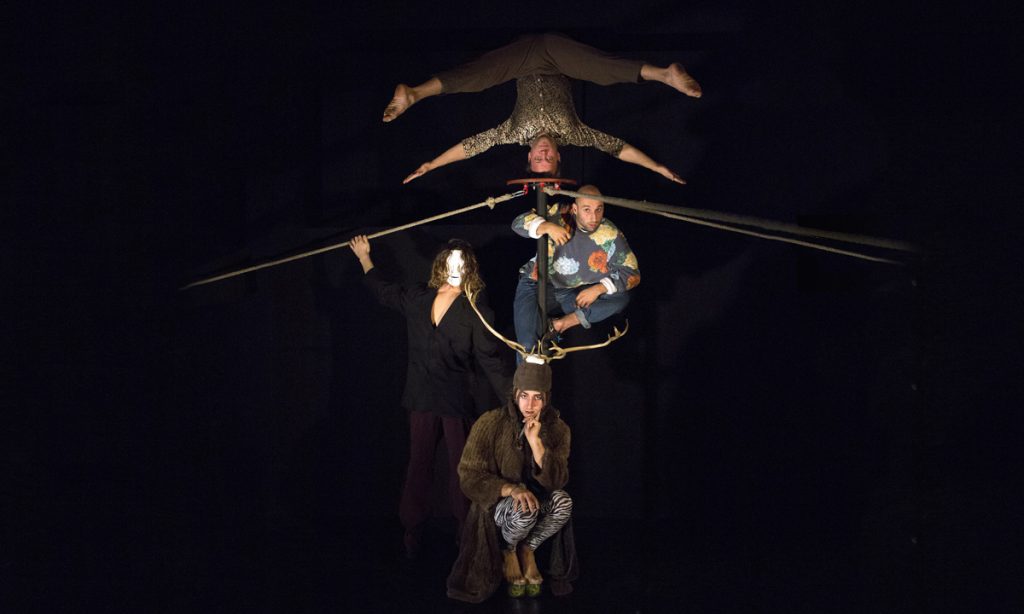 We are greeted by Svalbard, lit by pink neon over a set of upturned shopping trollies and loose wires. Actors lie prostrate in the midst of the rubble – one is suspended from the lighting rig. It’s like walking into the morning after a contortionist’s 21st out-of-control birthday party. That had then been blown up.

The show is iconoclastic. Its genius dismantles circus tropes and expectations. Glimpses of talent are ensconced in lengthy and provocative passages of reckless abandon, with heads stuck in buckets of water, heel clicking and antler fondling. Though this be madness, yet there’s method in’t. The Chinese pole is often used as a platform for profundity, performative narcissism, rather than technical skill. It’s a challenging show, and some of it falls flat (often literally) when it gets mired in these passages of deliberately provocative nothingness (swinging a light from the top of the Chinese pole for an extended amount of time was, if you’ll pardon the pun, by no means illuminating).

But All Genius All Idiot finally springs into gear in the final 15 minutes, launching into an impromptu cabaret routine laced with acrobatics and circus tricks. This continues with heady recklessness, finally stirring a sustained reaction from the audience that builds to a final sense of acclaim. The recognisable aria from The Marriage of Figaro is turned into a series of monkey noises – high art turned into basic nonsense. The message is exciting and provocative – it’s just a shame it took three quarters of the show’s meandering to reach it.