Review of: The Flying Lovers of Vitebsk

Kaleidoscopic tale of the famous Chagalls

The Flying Lovers of Vitebsk has been around for quite a while now, marking Emma Rice’s last piece at Kneehigh before leaving for what turned out to be a rather controversial stint at the Globe. And watching this, one can see why the panel decided to pick her. There is a delicate sense of time passing, of doing much with little, of letting words and movements speak for themselves and (despite a towering majesty of a set) not letting style trump the substance.

Casting the piece as a two-hander is a bold move, as the enormity of the October Revolution and the historical events thereby set in motion could feel rather small and lost with only two dedicated performers. However, Rice manages to conjure a sense of absence that is vital within the ever-changing world. Empty pairs of shoes litter the stage at the end, a visual reminder of the Holocaust and the countless characters referenced throughout the piece, but never shown. A disembodied voice hangs on the end of a telephone, a baby daughter is shown with a blank puppet. The Chagalls feel like they are floating on a wide, wide ocean, the set a raft held together with ropes and pins, bashed around by the huge waves of what happens around them and just barely clinging on. 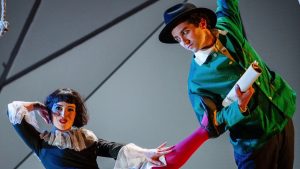 Married to this absence is a glorious, kaleidoscopic explosion of colour. Lighting Designer Malcolm Rippeth has truly been given all the toys to play with, and the manipulation of emotion and links to Chagall’s painting and colour schemes is absolutely flawless. There is a sense of the magical realist about the design, a world where everything is too bright, picking out the brightest of shades instead of mellowing them into the greys and beiges of reality.

However, this remains a very solid four-star show. The only thing that is missing is a sense of vulnerability, some moments where one longs to see past the ‘art’ of the production and into the souls of both Bella and Mark. Missing the first four days of your daughter’s life would probably count as a reasonable excuse for homicide, yet this depth of emotion doesn’t quite come across in Bella’s response. The tragedy and the emotional turmoil that must accompany with the October revolution feels woven out of hemp and paint, we don’t experience the glory and the terror in full. The visuals are gorgeous, the acting is extraordinary and the way the music intertwines with the piece is stunning. The piece encourages us to spectate as outsiders rather than to watch and empathize as someone within the story, with the lovers themselves.