Circus at its best. 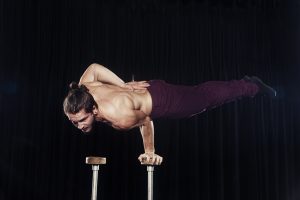 Elixir is a firecracker of a circus show. A mixture of clowning, amazing acrobatic skills and three extremely charming performers, it is a cornucopia of delights that never takes itself too seriously.

Based on a well-trodden plotline, the vague premise follows three scientists attempting to create the ‘elixir of life’ to defend the earth against a zombie apocalypse. So far, so predictable. However, the true joy in the piece is the skills with which the performers both charm and impress the audience – far too often circus prioritizes one over the other, seeking to awe spectators but lacking in a human connection. The cliché’s of the storyline work in favour of the piece, letting the acrobats laugh at themselves the way the audience does, immediately creating a sense of camaraderie and interdependence that is carried throughout the piece.

These three, however, have this human connection in spades. Flirting with the audience in every way possible, we are drawn through ladder skills, acrobatics, ring work with a dexterity and charm that means the minutes melt away. Keeping every look, every gesture feeling fresh after a tour which has lasted 2 years is no mean feat, and the brotherly collaboration between the performers was one of the bedrocks of the entire show. Absolutely spectacular.