Interesting and amusing show about schooling in the late 90s with some rather two-dimensional characters.

Fringe favourites The Wardrobe Ensemble return with this year’s offering, education education education, taking the audience back to the school days of the late 90s. A generally warm and well-acted show, the piece nonetheless suffers from a couple of missteps which drastically mar the overall enjoyment and rather overshadow much which is to be celebrated. 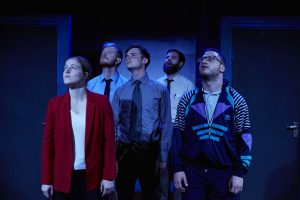 Education, education, education suffered from rather two-dimensional characters – understandable considering the farcical element of the piece, but there were a couple of depictions that I actively did not enjoy. The odd stereotype of the German Tobias was in no way entertaining, and could have been hugely improved had he been treated with the same brush as troubled schoolgirl Emily or the conflict-shy Welsh headmaster. This problem greatly influenced my enjoyment of the play – however good the rest of the scenes and the overall message were, there were so many moments including Tobias that made me slightly uncomfortable in terms of character portrayal. The undertones of xenophobia, however subtle, nonetheless completely ruined any appreciation of what was otherwise a beautifully-constructed piece. This might have been alluded to in one scene, where Emily’s ‘Nazi’ insult obviously ruffled Tobias’ well-groomed exterior, but even this just showed that the company were aware of what they were doing, but chose to play it for laughs. Making an otherwise problematic character homosexual is not the same as creating a personality with three dimensions.

Otherwise, the show was everything you’d expect from the constantly-evolving Wardrobe Ensemble. The staging was slick and professional, based on two doors and a variety of coffee cups – creating the illusion of endless corridors and general chaos behind classroom doors. The acting was incredibly strong and the contrast in teaching methods was particularly interesting, the piece itself not taking sides but allowing the audience to make up their own minds. Otherwise a strong show, it’s just a shame about the xenophobia.